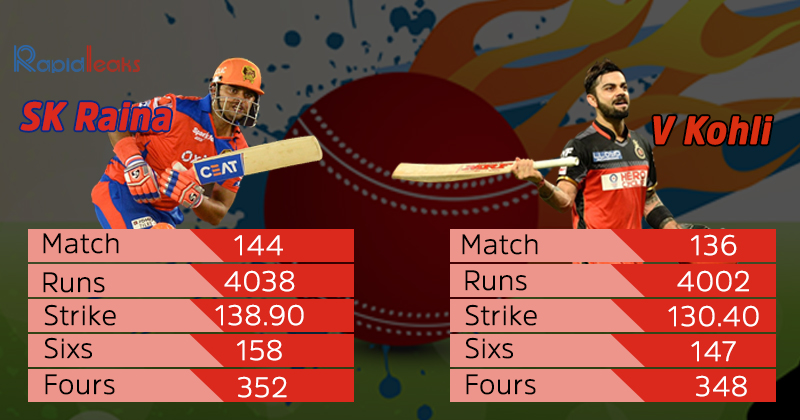 Suresh Raina recently became a father of an adorable daughter and seems like he is riding on his lady luck as he surpassed and beat Virat Kohli’s runs in the IPL. Virat had become the first man to cross 4,000 runs in the tournament’s nine-year history but Raina snatched his record as he smacked an 87-metre six off Morne Morkel over covers in the sixth over of the match at the Green Park stadium on Thursday in Kanpur against the Knight Riders.

Gujarat Lions may have had a disappointing start in IPL season 9 but they have overcome it brilliantly. They do not only beat Kolkata Knight Riders by six wickets but also grabbed the second spot in the Indian Premier League table.

Skipper Suresh Raina missed two matches following the birth of his daughter but after returning he smashed an unbeaten 53 runs off 36 balls which led Gujarat to a glorious win.

Gujarat Lions won the toss and opted to field first. KKR started their innings and Robin Uthappa and Gautam Gambhir came to bat first. Robin contributed 25 runs for Gujarat where skipper Gambhir could only manage to make 8 runs.

Kolkata never got the momentum right from the start. Gambhir got run out in the fourth over. Manish Pandey came and got off early in the next over.

For Gujarat Lions Smith was cracking every KKR batsmen with his gentle medium pace bowling. Kolkata was losing the wickets at the regular intervals as after the dismissal of Pandey (1), it was Uthappa who was sent back by Smith in the 7th over.

Piyush Chawla tried but could only score 11 runs for the team and got out in the 10th over.

Yusuf Pathan’s innings of 36 runs for Kolkata ensured that Kolkata managed to cross the 100 run mark.

Shakib Al Hasan (3) was dismissed by Smith in the 12th over. Upcoming batsman Suryakumar Yadav tried to threaten with his 17 runs inning in 14 balls but he was too sent back in the 17th over.

Yusuf Pathan was holding the hopes of Kolkata but fell in the 19th over on a delivery bowled by Kulkarni. Jason Holder’ 13 runs off 8 balls helped the team to put a decent total.

At the end of their innings, Kolkata managed to make 124 runs with the loss of 8 wickets. Gujarat’s bowlers restricted KKR to make more runs.

Now Gujarat was chasing an easy total of 125 runs. They had the most unexpected start as Dwayne Smith was sent back on the first ball. His partner Brendon McCullum too was sent back soon in the next over. But Skipper Raina saved his team as he smashed an unbeaten 53 runs off 36 balls for his team. He was well supported by Dinesh Karthik (12), Aaron Finch (26) and Ravindra Jadeja (not out 11) on the other side for Gujarat’s innings.

Playing patiently Gujarat chased the target without any hiccups in 13.3 overs and won the match.