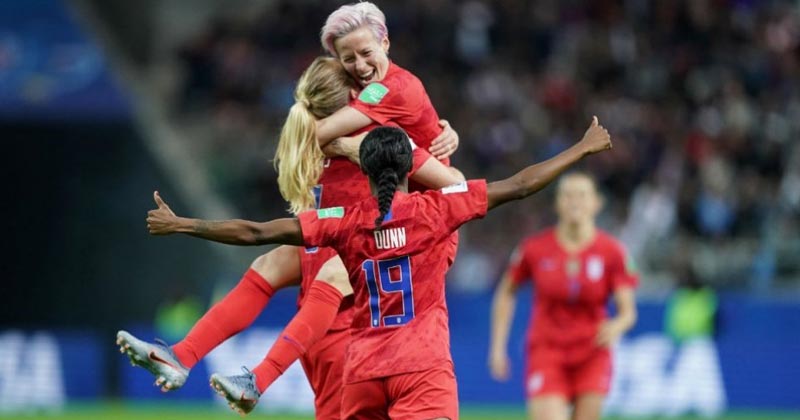 The USA have trashed Thailand 13-0 in their opening match of the Women’s World Cup, to set a record for the most games ever scored in a World Cup match.

With Alex Morgan scoring five of the 13 goals, she matched the record set by Michelle Akers for the most goals scored in a game.

To put this staggering achievement into context, the USA men’s team have only scored 12 World Cup goals in the past 6, 202 days…

For Morgan, her five goals were redemption for what she herself described as a poor performance at the Rio Olympics in 2016, something she was keen to put behind her on the biggest stage.

“To tie Michelle Akers’ record is obviously incredible. But even more than that, I think that this was such a great team performance for us. We were able to execute on so many chances that we had, and we showed just how diverse our attack really is. And we know that every goal counts in the group stages, and that’s why we had to keep going,” said Morgan.

While smashing in 13 goals in a single match is an incredible achievement, it wasn’t without controversy, as some pundits and press believed the US women should have taken their foot off the pedal against a clearly over-matched opponent.

For veteran midfielder and mainstay of the US team Megan Rapinoe, the match served as a great way to kick off the World Cup, although she knows they will face tougher challenges if they are to lift the trophy again.

“I don’t know if we need to really make a statement, we’re us — I feel like it’s always on our backs anyway. … But yeah, we wanted to have a good performance and have a good feeling, obviously. We know the competition will be much stronger from here on out and, hopefully, once we get to the knockout stages,” said Rapinoe.