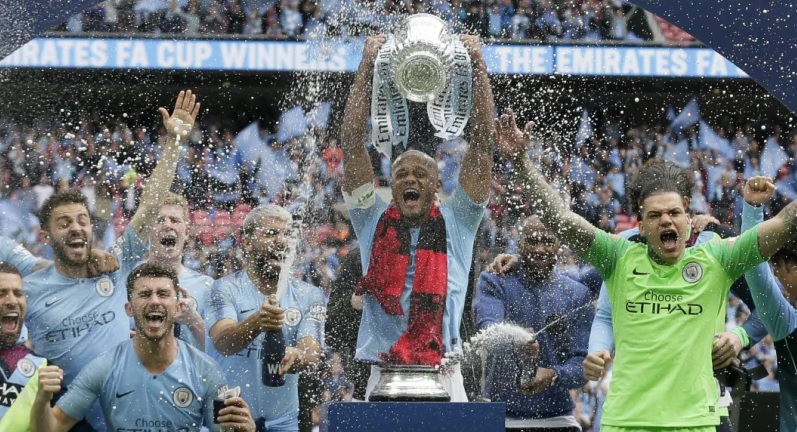 After winning the Caraboa Cup against Chelsea and being pushed to the brink in the Premier League by Liverpool, Manchester City have completed a historic season, wrapping up a domestic treble with a 6-0 hammering of Watford in the 2019 FA Cup Final.

As a spectacle, the contest was effectively over before half time, thanks to goals from David Silva (26’) and Gabriel Jesus (38’).

In the second half, The Citizens would pour on four more goals, equalling Bury’s116 year old record for the biggest winning margin in the FA Cup final.

“It’s one of the best seasons I’ve experienced as a manager, not the best but one of the best for sure,” Guardiola said at the post-game press conference. “To be for 10 months playing in all competitions. No team, including incredible teams in this country, have done this and we were the first.”

“It’s not easy for 10 months, every three days being there because when you have one bad night you are out of competitions. And especially the way we played today we were a little bit short of energy but that’s normal.”

Local lad Raheem Sterling, whose boyhood home has views of the Wembley Arch, looked to have been the first player to score an FA Cup Final hattrick since 1953, however the second goal of the match was credit to Gabriel Jesus, some 30 minutes after the final whistle.

“I’ve disputed it!” Sterling said. “What can we do?

“The boys were brilliant today and my goals just added to the win. Everyone was fantastic.

“Credit to all the boys today. It’s been a fantastic year.”

“Growing up here, growing up seeing this get built, it’s a dream to be on this football field and winning trophies. It’s a massive dream come true.”

For Watford boss JaviGracia, the fairy tale run turned into a Wembley nightmare, as he watched his team concede six goals in the English seasons showpiece.

“It’s a difficult moment, because this defeat is difficult to accept. But I prefer to be positive, even in this moment. I think the players have done good work this season, and today we’ve played against a very good team.”

“We played well in the first part of the game, and if we scored the goal after 10 minutes, maybe the game could change. After that it’s difficult to say, we’ve lost 6-0 and to reduce the game to two plays is not fair. They (City) played well, I congratulate them.”

After back-to-back Premier League triumphs and a domestic treble, where do City go from here?

Despite an investigation into breaches of the Financial Fair Play rules, which may carry a 12 month ban from the Champions League, the club are still pushing forward with their dream of winning the biggest club competition in the world, to cement their place at the top table of football.

For now, the team will bask in being the best in England, and their fans will celebrate a stellar season for years to come.