Lionel Messi, the Barcelona footballer has been sentenced to 21 months in jail for tax fraud. His father Jorge Messi has also given a jail term. The footballer and his father were found guilty of tax fraud and a court in Barcelona ruled 21 months jail sentence.

They have been found guilty of  defrauding Spain of €4.1m (£3.5m; $4.5m) between 2007 and 2009 and millions of euros fine is charged in addition to the jail term. Neither Messi nor his father Jorge are expected to serve time in jail as under Spanish system jail term under 2 years can be served under probation. 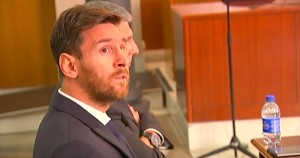