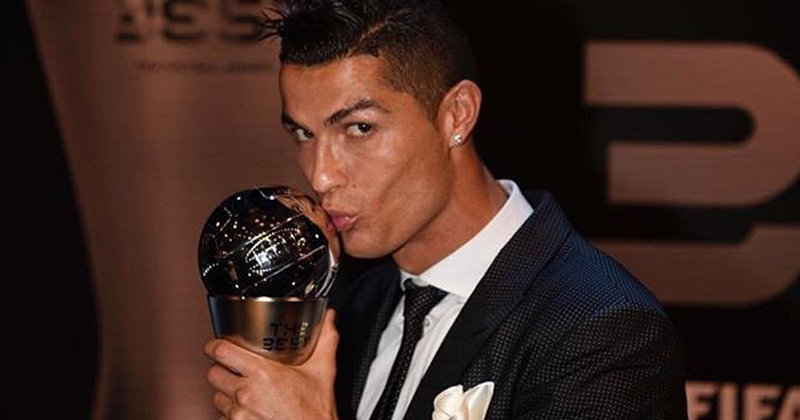 Cristiano Ronaldo, after a glorious 2016/17 season, has lifted his fifth Fifa Best Player Award in a ceremony held at the London Palladium, leveling with his arch-rival Lionel Messi, who has won the award, as many time.

However, it seems that Cristiano Ronaldo is not yet satisfied with his stack of trophies and wants more before he hangs his boots. The four-time Ballon d’Or winner lifted the La Liga and Champions League trophy in the previous season with Real Madrid, striking twice against Juventus during the European Cup final to help Los Blancos become the first team to retain their trophy in its current format.

Talent without work is nothing
– Cristiano Ronaldo 2017 – ?? pic.twitter.com/FSaPWuwUOa

Moreover, he became the first footballer to have scored 100 Champions League as well as European Goals. As far as the year 2017 is concerned, Cristiano Ronaldo has scored 44 goals and assisting 12 strikes in just 48 appearances for Real Madrid and country so far, including his brace in 4-1 Champions League final win against Juventus in Cardiff on June 3.

Lionel Messi did outscore his counterpart, netting 54 goals and assisting 16 strikes in 52 appearances, but the Argentine only managed to lift the Copa del Rey and Spanish Super Cup.

For the Fifa Best Player Award, Cristiano Ronaldo saw off competition from his long-standing Barcelona rival Lionel Messi and PSG’s Neymar, who is currently the most expensive player in the sports.

Amazing feeling to have won this award again. Want to dedicate to my family, my friends, my teammates and coaches from both Real Madrid and Portuguese NT and everyone who supported me. pic.twitter.com/umpYMo1JZg

For the unknown, Fifa World Player of the Year award was merged with France Football’s Ballon d’Or in 2010 to instigate the Fifa Ballon d’Or for the next six years, a period in which Lionel Messi and Cristiano Ronaldo dominated the award.

In 2016, Fifa decided not to renew the deal, meaning the Ballon d’Or lost its ‘Fifa’ tag while reverting back to being voted for by journalists, and a separate Fifa Best Player Award was created. It is voted for by a collection of journalists, national team captains, national team coaches, and the general public – each category having a 25 percent weighting towards the overall result. On the other hand, The Ballon d’Or winner will be announced by France Football towards the end of the year.

Including the years when FIFA merged its individual awards with the Ballon d’Or, Cristiano Ronaldo and Lionel Messi have now been labeled as the best player in the world five times apiece, by football’s global governing body.

to be honest..
Cristiano ronaldo, the definition of never giving up! pic.twitter.com/FGZ4YxwbXN

We all know about Cristiano Ronaldo’s contribution towards world football and his tally of achievement that seems to have to no end, however, after winning his fifth Fifa Best Player Award, the Portuguese said that he wants a total of 7 such awards before hanging his boots as this is his lucky number.

Speaking to reporters after the ceremony at London Palladium, Cristiano Ronaldo said,

“I don’t compete with Leo Messi. He is a player, who is in the same era. He has won five times. I have won five times too — individual awards for the best in the world. Things are as they are and obviously, I am happy because, I am at the best club. I have had the opportunity to demonstrate that I am at my very best in the last few years. And I am still [physically] very well.

When asked whether Ronaldo vs Messi was over, the 32-year-old said,

“It didn’t finish yet… it is just starting.”

Zidane is the FIRST man in the history of football to win both FIFA Best Player (x3) & FIFA Best Coach awards #TheBest pic.twitter.com/0lemQkKfXN

The Netherlands’ Lieke Martens won the best female player of the year, while the best manager award went to Dutch women’s national team coach Sarina Wiegman after the team’s triumph at Euro 2017.

As for Real Madrid, the reigning Spanish and European champions, they are currently trailing five points behind La Liga leaders Barca, whom they will be hosting in the first El Clasico of the season on 23rd December.