One can never expect that either Cristiano Ronaldo or Lionel Messi will ever cease to challenge each other on the individual records tally and as for 2017, it’s the Portugal National who has bagged every major trophy and has ruled the individual record race against his arch-rival.

After winning the Fifa World Player Of The Year and Ballon d’Or award 2017, Cristiano Ronaldo took Real Madrid to its third Club World Cup Title in the last four years which has brought Los Blancos at level with their arch-rivals Barcelona as the most successful club in the history of this tournament.

Ronaldo’s 25-yard free kick against Gremio in the second half of FIFA Club World Cup final ensured that Zinedine Zidane’s men edge past their opposition by 1-0.

After Copa Libertadores’ holders Gremio showed no sign of achieving an opener, just eight minutes into the second half, Cristiano Ronaldo won the free kick by tricking Jailson 25 yards out of the post. The Portugal captain’s then shot the ball which went straight through the Gremio wall and although, the defenders will not enjoy watching the replay, the shot was powerfully struck, and Gremio’s goalkeeper Grohe had no chance of stopping at all.

Cristiano Ronaldo’s set-piece dominance might be questioned at the Bernabeu, but he now has 32 free kick goals in four different competitions for the club.

It was a golden game for both Real Madrid and Cristiano Ronaldo as while the club became the first team to successfully defend the Club World Cup title, the five-time Ballon d’Or winner had his fourth triumph in the competition, a new record that he shares his teammate Toni Kroos.

Both players have won three Club World Cups with Real Madrid in 2014, 2016 and 2017, while the Portuguese added another with Manchester United in 2008. Toni Kroos, meanwhile, lifted his first with Bayern Munich in 2013.

While the Real Madrid duo have won the most Club World Cup titles in history, they now have one more title than a five-man group which includes Messi, Dani Alves, Sergio Busquets, Gerard Pique and Andres Iniesta.

Other than Ronaldo’s strike being the only time the ball hit the nets, the goal was way more important for the player than the result.

After becoming the leading goalscorer in Club World Cup history, all thanks to his equalizer in Wednesday’s 2-1 semifinal win over Al Jazira, Cristiano Ronaldo has added yet another record to his tally, which has brought him at level with the Brazilian legend, Pele. 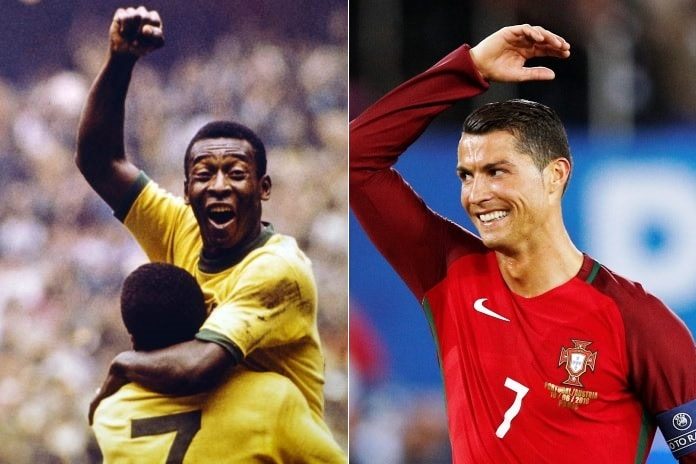 With his only goal in the FIFA Club World Cup final, Cristiano Ronaldo now holds the record of seven strikes in the tournament’s history. The legendary Brazilian also scored seven times for Santos at the Intercontinental Cups in 1962 and 1963.

Despite his failures in La Liga, Cristiano Ronaldo has been on a record-breaking spree in 2017 as the year saw him becoming the first player to score 100 European as well as Champions League goals, winning the La Liga as well as UEFA Champions League trophy, winning his 5th Fifa World Player Of The Year and Ballon d’Or award and also being the leading scorer in Europe.

Apart from that, he also became the first player to score at least once in all group games of a Champions League season.

With all these individual achievements, all that remains to be seen is how Lionel Messi will get back into the race in the 2017/18 season.