Home Sports Football A Reporter Gave His Mother’s Lucky Ribbon To Messi And Then Argentina... 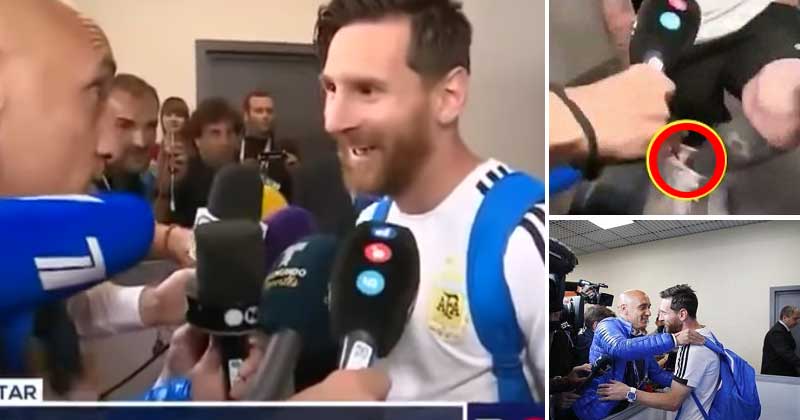 How good of a person you’re is often driven by how you behave with others who’re below your stature in the society. Which is why a majority of football fans consider Messi to be an exceptional human being. He’s always good to his fans and people around him and to even those who keep on nagging him.

If you’re someone who hasn’t yet seen Messi being a breath of fresh air and an absolute darling then here’s a proof.

On June 16th, after Argentina vs Iceland match where Argentina drew with Iceland and was put in a tricky situation, a reporter met Messi and asked him about the match. After the interview, the reporter told Messi about how much he was adored his mother. He even showed Messi his mother’s lucky ribbon and how he keeps it with himself at all time, he offered to give Messi the ribbon as a lucky charm, considering his performance in the World Cup seemed pretty jinxed.

Cut to June 26th, after Nigeria v/s Argentina in which Argentina won their first match in the World Cup and was able to secure their place in the Round of 16. More than that, Messi was able to score the first goal of the match. The same reporter came back to Messi after the match and asked if he remembered him. What happened next is something that could be the living proof of how amazing a man Messi is.

He showed the reporter that he got the ribbon stitched to his socks as a lucky charm and how it was one of the reasons behind his goal.

God I love Messi so much, he's the best ever, I can't believe how good he is. pic.twitter.com/f2nzpGRSGd

Messi went from being a poor kid who's loved by his grandmother, to being a legend loved by every mother in the world, this is more than just football ? Messi is something else!

Adorable right? Even we have the same reaction after watching this video. Here’s how others reacted to the video.

This made my heart melt

Messi haters can say whatever, but the truth is, he’s the nicest and kindest man ever!