Home Sports F1 What were the top moments from Sebastian Vettel’s 2018 season that deserve... 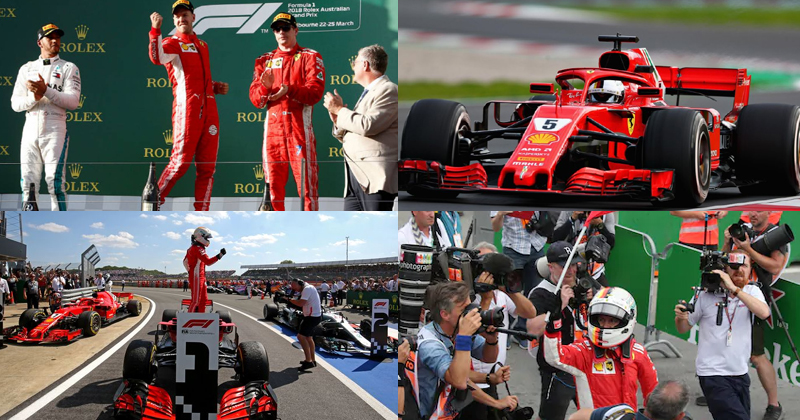 The 2018 F1 season will probably always be remembered for the temperamental outbursts of Max Verstappen, a multiple race winner this year, the rise of Charles Leclerc, Raikkonen proving he’s not done just yet and for the mega battle between Vettel and Hamilton, which was clinched yet again by the latter. But what according to you signifies the Sebastian Vettel 2018 season?

The German Ferrari driver once again, emerged second but only to arch-rival, Lewis Hamilton. At Mexico City- a place that celebrates the Day of the Dead- Hamilton and Vettel’s camaraderie birthed a new life in a fiery Formula 1 equation that showed us fans that it was more than about on-track battles; that it was about chivalry.

If anyone wanted to understand whether chivalry was dead or alive could well rewind the clocks back to the completion of the Mexican Grand Prix.

Sebastian Vettel, at the conclusion of the Mexican Grand Prix, rushed immediately to the Mercedes paddock to congratulate Hamilton’s team for the great feat they had gathered.

It showed that Vettel respected a team that had successfully outpaced him and his Scuderia stable. This year hasn’t only been a Lewis Hamilton year. It’s been a year where Vettel emerged unscathed and victorious by sneaking out two utterly memorable drives from right under the nose of five-time world champion Lewis Hamilton, as seen at Silverstone and Montreal, two destinations where only the Hamilton flag of dominance has fluttered endlessly so.

We are now hours away from the start of the 2018 Abu Dhabi Grand Prix. How quickly do the vagaries of Formula 1 change and bring upon us the fascinating but painful sight of witnessing the season-finale- isn’t it?

Yas Marina a track where Sebastian Vettel nearly took the Mickey out of Nico Rosberg in the final stages of the nervy 2016 race. This is a track where Vettel’s raw pace under shiny bright lights made for a fantastically fought 2017 Grand Prix. And this is a track where under the Red Bull banner, a young German driver emerged victorious on multiple occasions, first in 2009, then in 2010, and finally, in 2013.

This year too, Vettel would love to conquer the last hurrah of the 2018 F1 season, a year where he’s managed 11 podiums, 5 of them culminating into race wins.

Having said that what are some the top moments that signify a strong Sebastian Vettel 2018 season even if not the greatest?

Clinching a sensational season-opener at Australia

Melbourne has, over the course of the past few years, emerged as a track that’s been utterly dominated by Sebastian Vettel. This year too, Vettel oozed class right at the start of the season, eventually claimed by Lewis Hamilton. This was impressive, not only because Vettel won the first race of 2018 but simply for the reason that he wasn’t the pole-sitter.

To be able to win a race ahead of Hamilton is special. But to beat your arch-rival, but clinching the lead of the race from the pole-sitter is something worth applauding. While 2017’s race was an out and out triumph for the German, it was his grabbing the lead from Hamilton and going on to convert the track position into a Grand Prix win that made the season-opener a fine effort.

The win at Silverstone

You cannot blame fans for actually saying that the Ferrari driver’s win was luck-assisted on this occasion, for it was. But was the win at Britain only down to Sebastian’s luck?

As Kimi and Hamilton came to blows at the first two corners right at the start, for no fault of Lewis, Vettel would inherit the lead of the race. From that point on, he was the man-in-charge and someone who wouldn’t relent.

At the end of the day, to think that both drivers were able to win at their opposite number’s home race was every bit special as it was thrilling. Confused? Who won the German Grand Prix, Seb?

The win at Montreal

Vettel’s dominant triumph at Montreal meant that he was able to wave the Ferrari flag at a track that’s essentially served as Hamilton’s fortress. Perhaps, it won’t be too wrong to call it as a circuit that’s been Lewis’ home away from home. This was a remarkable win for the simple reason that it came at the back of Vettel enduring rather lacklustre races at Monaco and, previously, Azerbaijan. Locking up under braking during the closing stages at Baku had meant that his rival, Hamilton would win. Not this time at Montreal, however.

The late lunge on Bottas, Silverstone

Clearly, a strong candidate for winning the best move of the year- if there was any- it was Sebastian Vettel’s exceptional late lunge on the Mercedes driver Valtteri Bottas that gave the Ferrari the lead of the race, and later the win.

Passing Bottas meant retaking the lead of the British Grand Prix. Sebastian Vettel, approaching a sharp left-hander toward the closing stages at Silverstone, came from way behind Bottas and dived into the inside of the Finn to execute a clinical racing move that earned him the track position. This was certainly Grand Prix racing at its finest and was a differentiator of sorts that made for one of the best sights of the Sebastian Vettel’s 2018 season.