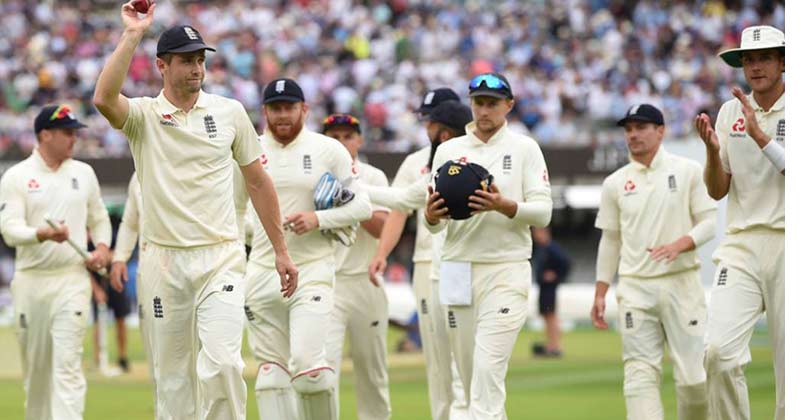 Barely 10 days after winning their maiden World Cup, England find themselves in an embarrassing spot. In the first and one-off Test between England v Ireland at Lord’s, the home side was shot out for a shocking 85 inside the first session itself against a side playing only their second international Test match.

Electing to bat first on a fine English morning and a pitch that had a tinge of grass, England wanted to assert themselves in the Test and put on a solid score. To their horror, though, they discovered early that the Irish bowlers, particularly Tim Murtagh, had found the perfectly channels to bowl to and exploit the conditions perfectly. Except for Joe Denly (23) and Sam Curran (18) for a while, none of the others – three batsmen fell for ducks – really had any answers posed by the determined Irish bowlers.

Murtagh, especially, was sensational as he produced a majestic spell of seam bowling and ended up with figures of 5-13 in just 9 overs – the fastest ever in terms of deliveries bowled on this venue. Murtagh accounted for both the English openers and then helped wiped out the tail in a masterclass of a spell where he bowled immaculate lines, moved the ball just enough and simply didn’t give anything to the batsmen.

England, who were still probably in the hangover of their thrilling World Cup win and were found napping in the toughest format. With their World Cup honeymoon now over, the home side has a challenge on their hands and has been served a great wakeup call before the big Ashes series begins.

A tale of familiar collapses for England

England’s dramatic collapse in the England v Ireland Test wasn’t an aberration; this is now the 4th time they have been bowled out in a session since 2016. Apart from the Test against Ireland, England were bowled out inside a session against Bangladesh at Mirpur in 2016, against New Zealand at Auckland in 2018 and against India at Trent Bridge in 2018.England’s batting collapses have become familiar

This is a worrisome pattern that has emerged in the recent past for England and shows the brittleness of their middle-order under testing conditions and when put under pressure. With the Ashes just a week away, the team management would quickly need to put this shocking performance behind them and hope for better batting displays.

Ireland are here to stay in the long format

This sensational bowling performance by Ireland against England holds them in real good stead as they showed the world that they belong to the Test arena. Irrespective of how the remainder of the England v Ireland Test goes, the Irish has exhibited great mettle and gumption. Along with Murtagh, Mark Adair and Boyd Rankin bowled great channels and demonstrated great nous to understand the pitch.

This is a spirited bunch, led ably by the experienced William Porterfield. In Paul Stirling, Kevin O’Brien and Andy Balbirnie they have a sound batting unit along with their captain and if they can consistently support their talented bowlers then Ireland will keep punching above their weight against bigger teams in Test cricket.Kevin O’Brien after his hundred against Pakistan

Even in their maiden Test match against Pakistan last year, Ireland, despite losing the game, put on a solid fight. After following-on in that game, they posted 339 on the board and then had Pakistan reeling at 14-3 once in the chase of 160.

With more experience in the longer format they might well emerge as a strong force in years to come. All they need now is the proper backing of all the other cricketing boards.