“We’ll see you at your home,” dared England! “Yeah, welcome to Barbados”, said the West Indies!

“It’s been a while since I’ve played Test cricket.

The series against Bangladesh was really tough. (But) It’s really good to see the hard work to have paid off.

I’ve been a bit bottled up for a while.

I had the moment there to express myself a little bit. To have seen Shane get to his hundred was very, very special.

Credit to Roston Chase; I couldn’t have asked for anything more from him.

I just want to say thanks to my mom and dad.

We’ve still got a long way to go. One Test match doesn’t make a summer. There are two more Tests to go.”

At the conclusion of England’s thrashing at Bridgetown, Barbados, a ground where the West Indies hammered a few nails in the tourists’ coffin, perhaps leaving the task of tightening them on Antigua, you were mesmerized.

You took note of something.

You were, whether or not a Windies fan, spellbound, both by the incredible statistical drubbing that West Indies’ 381 runs win provided the fan but also by a sense of calmness that captain Jason Holder oozed having just completed a romp of the Poms (as they’re called) and, that too, inside four days.

And this was Test cricket. So you, the tired fan who’s grown used to seeing his side capitulate (so often) were even more star-struck. But also because you’ve never given up on your team; a side that tests your patience as Shiv Chanderpaul tested that of the bowlers’.

And that is why what you saw at Bridgetown, Barbados- a fortress the West Indians seldom allow being breached, a fortification that saves its wondrous sons from the hunters- was magical.

For a team whose usual post-match presentation ceremonies often signify spelling the customary, “We will try to see where we went wrong, or, definitely there are a lot of things about our cricket that we need to work on“, you were, for a good one minute, regardless of being a cynic or a purist, left in shock and amazement by Holder’s words.

It wasn’t that the all mighty conqueror descended on the earth and put on a human mask, and entered the body called Jason Holder.

It felt that among the simplest pleasures of life in the Caribbean; that of seeing the West Indies play the way they hardly do or let’s confess, do so very scarcely made headlines, broke records, resulted in the team winning the Wisden Trophy’s opening Test, cracking the tourists’ back, and succeeded in perhaps making some eyes numb.

It was almost that their incredible 381 run-win against England seemed so utterly fulfilling in its effort that it may only compel the team to approach the next Test even harder.

So dynamic seems this current West Indies side that only ones who were around when they had smashed England back in 2015, resulting in a 5-wicket win, also at Bridgetown, Barbados was captain Jason Holder and Darren Bavo.

While Bravo, absent from scoring runs for no particular reason on this occasion had been the lone star in that Test scoring a match-winning fifty, Jason Holder, who had always rallied behind his troops back then didn’t change much on this occasion.

Well, it’s just that a lot has changed in this young, new looking West Indian unit, that while seemed an unlikely winner in 2015, made its 2019 Barbados triumph worthy of a pure team effort as magnified by the likes of Kraigg Brathwaite, Hetmyer, Chase, Dowrich, and Holder himself.

What didn’t, at least, the locals may want to reflect on, is that Kemar Roach, whose fifer in this Test’s first inning set the foundation of the win, was also around in 2015, a time where Holder’s unit was once boys who are now readying to fight like men.

And what can be better than the constant bashers of the West Indies Cricket seeing for real that they are far from ‘over’, as alleged? Given how a mere recollection of a Brian Lara-special (thanks to YouTube) brings back so many memories, one’s compelled to think what might happen should the side play with continued cohesion as seen in the opening Test?

The sense of optimism regarding the future isn’t unfounded. For starters, ‘Lil’ Bravo is back, but is he?

Anyways, why let deliberation get in the way of team celebration, no?

But in a Test where Roach seemed ‘trigger happy’ exposing the frailties of the English batting order with Hetmyer and Hope making Anderson and co. lick their wounds, one wondered what was more beautiful.

Was it the fact that Roston Chase contributed through that match-winning 8-for with the ball or that bowling all-rounder Jason Holder extended his arms, clenched his fists and jumped in joy at having scored a Test double, something that you probably expected of him ever since his famous Antigua knock stirred critics a few years ago.

But above anything, implicit in England’s loss, barring the decision to drop Broad(decisive, according to Mike Atherton) was the fragility of their batsmen, as exposed by Holder’s bowlers.

While in the first inning, Gabriel and Alzzari Joseph joined forces to probe the English, in the second, it didn’t seem that the seamers were even required to play a role as Roston Chase’s occasional spin proved enough to bury the English in the middle of the Kensington Oval.

That told, here’s what stood out.

If the West Indies indeed are on their way toward that point we call rebuilding then, it has to be said, quite like a brick, many many pieces of their concrete will still need to be placed together for their wall of resurrection to be complete.

The smashing double hundred by the leader of the pack, a magnificent hundred by the calm Shane Dowrich, a pace attack operating like a battery, and a strong middle order boasting of Shai Hope, who’s begun 2019 with a solid fifty, one wonders could Darren Bravo returning to scoring ways make West Indies even stronger than what they currently seem? 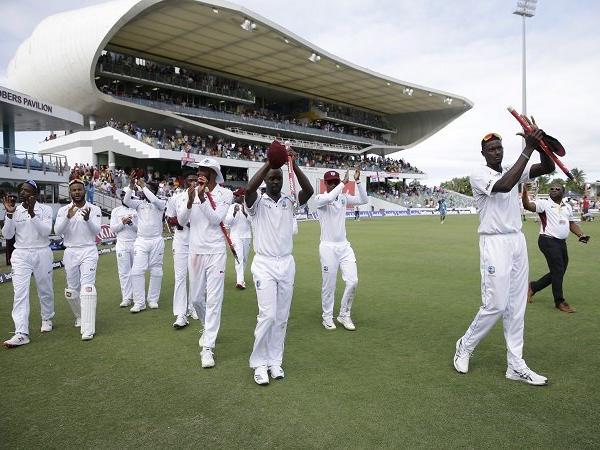