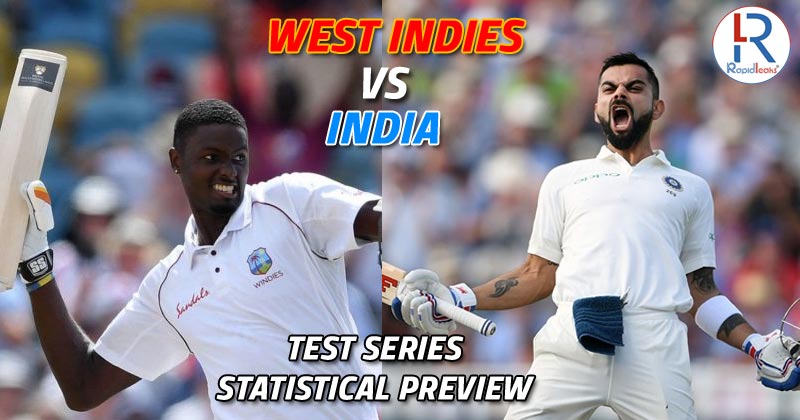 India and the West Indies have squared off against each other in 96 Tests so far. The West Indies, courtesy their dominance in the 70s-80s, are ahead, having won 30 Tests while India has won 20. There have also been 46 drawn Tests between the two sides.

The last time India lost a Test series to the West Indies was way back in 2002, when the Carl Hooper-led West Indies had defeated Sourav Ganguly’s India 2-1 at home. Since then, though, the Indian team has only gotten stronger and West Indies has suffered a dramatic decline. India hasn’t lost a single Test series against the West Indies and Virat Kohli and his men would be determined to keep that record intact.

Most runs in a series by a batsman:

In the upcoming two-match West Indies vs India Test series, the likes of Virat Kohli, Cheteshwar Pujara and Shai Hope would be looking to emerge as the highest scorer of the series. The record for the most runs in a Test series between India and the West Indies is held by Sir Everton Weekes who amassed an incredible 779 runs in 5 Tests with 4 hundreds and 2 fifties in the 1948-49 series between the team teams.

The highest individual Test score by a batsman in India-West Indies Tests is 256 by the legendary Rohan Kanhai of the West Indies. Kanhai’s epic knock came in the Kolkata Test of 1959 between the two teams and helped the tourists secure a thumping innings victory.

The record has stayed for 60 long years. Will it be finally broken in the upcoming West Indies vs India Test series?

That Jasprit Bumrah is going to be the biggest threat for the West Indies in this Test series is an understatement. The fast bowler has been one of the best across formats and has especially excelled in Test cricket. Since January 2018, when Bumrah made his test debut, he has taken 49 wickets in 10 Tests at an average of 21.90. These numbers are likely to improve in the West Indies vs India Test series.

Most Runs and Most Wickets:

The history of the stats in the West Indies vs India Tests is dominated by two Indian greats – Sunil Gavaskar and Kapil Dev. Gavskar, who loved batting against the West Indies, is the highest run-getter in India-West Indies Test with 2749 runs in 27 matches at an average of 65.45 with 13 hundreds and 7 fifties. He is followed by Clive Lloyd who collected 2344 runs in 28 Tests.

Kapil Dev, meanwhile, is the leading wicket-taker in the India-West Indies Test history with 89 wickets in 25 matches at an average of 24.89. The second name on this list the fearsome Malcolm Marshall who had 76 wickets against India in only 17 Tests at a superb average of 21.98.

India’s left-arm spinner Ravindra Jadeja is on the cusp of a special record. Jadeja has 192 wickets in 41 Tests so far. The Saurashtra all-rounder needs only 8 more wickets to reach the milestone of 200 Test wickets. If Jadeja can achieve this in the West Indies vs India Test series, he will become the fastest left-arm spinner to do so in Test cricket, leaving behind Sri Lanka’s Rangana Herath who achieved the feat in 47 Tests. If he can do it in this Test series, Jadeja will also become the second-fastest after Ravi Ashwin to reach the 200 Test wickets mark and the 10th Indian to join this elite list.

Captain Kohli on the brink of history:

Virat Kohli has been one of India’s most successful captains already. His performance as a leader away from India, especially, has been excellent – 11 Test wins in 25 matches. He is now at par with Sourav Ganguly who too had won 11 away Test wins as a captain in 28 matches. If Virat manages to win even one match in the upcoming Test series against the West Indies he will enter the record books as the most successful Indian captain away from home. Also, if Kohli manages to help India win the series 2-0, he will have 27 Test victories to his name and will come on par with MS Dhoni as India’s most successful Test captain ever.

It will certainly be a record to cherish for captain Kohli.

The West Indies vs India Test series should be an interesting one. And by the end of the two Tests we are sure to get some important stats to look over.