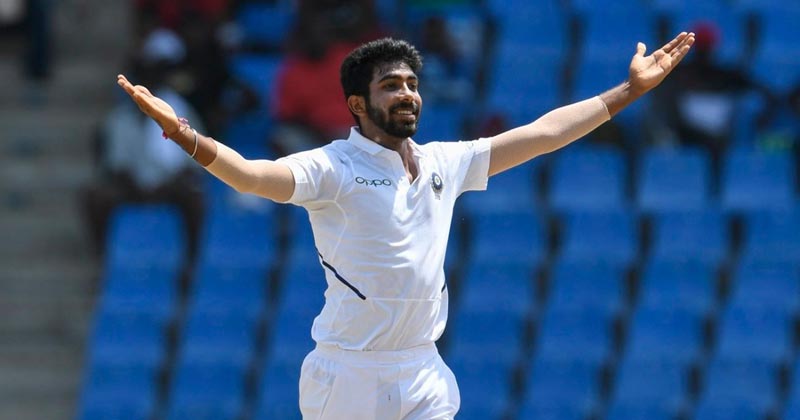 It was an exhibition of sensational fast bowling. On a dry pitch, Jasprit Bumrah had the West Indian batsmen prancing around all over the place with his varying lengths, lines and movement. The young Indian fast bowler finished with stunning figures of 5-7 in 8 overs in the 2nd innings of the 1st Test between West Indies v India at North Sound. He was instrumental in India’s thumping 318-run victory.

While Bumrah has impressed almost every cricket enthusiast these past few seasons, his spell in the 2nd innings of the Test really caught everyone’s fancy. The way he moved the ball away from the batsmen both ways, at pace, made him almost an impossible bowler to face. The result was stumps flying all over the place and none of the West Indian batsmen having answers to Bumrah’s skills. In fact, had skipper Virat Kohli held on to a regulation catch of Shimron Hetmyer, Bumrah would have ended with a six-wicket haul.

With that haul, Bumrah now has 55 wickets in just 11 Tests at a terrific average of 20.63 with 4 five-wicket hauls already. He has also now become the first Asian bowler to take five-wicket hauls in South Africa, England, Australia and West Indies. That speaks volumes of Bumrah’s potency and the impact he has had in such a short while – he is still only three years old in international cricket.

Bumrah has already shown his prowess in the limited overs formats – his exploits in the recent ICC World Cup 2019 was a case in point – and now he has progressed to be a genuinely threatening wicket-taking fast bowler in Test cricket as well.

Jasprit Bumrah – Dazzling the best with his skillset

Jasprit Bumrah is clearly one of the best bowlers in the world right now and his list of admirers keeps bulging rapidly. West Indian fast bowling legend Andy Roberts is mighty impressed with Bumrah and feels he is the best Indian fast bowler he has ever seen.

“In my time, it was all spin,” Roberts said, reflecting about the era he used to play in. “Good ones, but they wouldn’t win you matches overseas. India had Kapil Dev and some others, but we never thought they could produce someone as lethal as Bumrah. He’s the best Indian fast bowler I have seen.”

That’ some rather high praise for the young bowler. And well-deserved, too. Bumrah is the best and the most lethal, as Andy Roberts says, Indian fast bowler to have emerged in a long time. Even if we don’t even get into the statistics, he appears to be the most effective Indian seamer after Kapil Dev. Yes, Javagal Srinath and Zaheer Khan have left significant imprints on the game. But Bumrah appears to be on a different level altogether.

The skillset on display – the rhythm, the pace, the nagging lines, the subtle movement away from the batsman – makes Bumrah worth watching as a bowler. He is good; irrespective of the pitch condition and the opposition. He is good; irrespective of the format. Cricket fans and experts speak so much of the pace bowlers of yore; often with rose-tinted glasses. There is also so much talk about how cricket has overwhelmingly become a batsman’s game today with bowlers almost always scurrying for cover. Perhaps that is true in many ways. But then, here is a bowler who is dominating across formats. Effortlessly. And one who doesn’t bother about the pitch or the size of the batsman’s bat.

Another West Indian bowling great, Curtly Ambrose, was highly impressed with Bumrah’s performance in the West Indies vs India Test match. Ambrose feels Bumrah has the right aggression as a fast bowler despite having a quiet demeanor. Ambrose, who formed a fearsome and famed twosome with Courtney Walsh, also felt that Bumrah reminds him of them when they were in their prime.

“At times, he rekindles memories of our prime,” he said. “The pace, aggression, the hostility, the craft. The way he outclasses the batsmen, the way he out-thinks them. He could have been one of us, he’s so complete a bowler that he could have played in any era.”

There perhaps could not be higher praise for such a young bowler. With this kind of adulation any young man can easily let things get to his head. But Bumrah appears to have a mature head on his shoulders. He doesn’t get carried away, remains calm and focused and just attempt to do what he can do best – bowl fast, utilize his skills and take wickets.

At just 25 years of age, Bumrah has a long way to do and a lot more to achieve. He is extremely fit and disciplined. However, India does play a lot of cricket and Bumrah is the lead bowler of the team across formats. Add to that his commitments at the Indian Premiere League (IPL) every year for his franchise, the Mumbai Indians. Hence, there are high chances that Bumrah might get burned out If he isn’t handled wait care.

The onus will now be on the Indian team management to ensure that Bumrah’s workload is managed astutely and he isn’t pressed for playing every series. Far too often in the past, Indian cricket has lost gifted fast bowlers due to poor handling of their workload. Fortunately, Virat Kohli realizes that and has been using Bumrah prudently for now. It also helps that the Indian fast bowling bench strength is teeming with talent – young seamers like Navdeeep Saini and Deepak Chahar are waiting in the wings and experienced ones like Ishant Sharma, Bhuvaneshwar Kumar and Mohammad Shami are going great guns.

It will be fascinating to see what new magic Jasprit Bumrah conjures up in the seasons to come. With a fresh season of cricket at home from September to December and a big tour to New Zealand in January-March, Bumrah will be the team’s key weapon. By the end of this long run, Bumrah might well have emerged as a mightier bowler, with many more prominent names added to his fandom.

This is the age of Jasprit Bumrah. We might as well accept it.