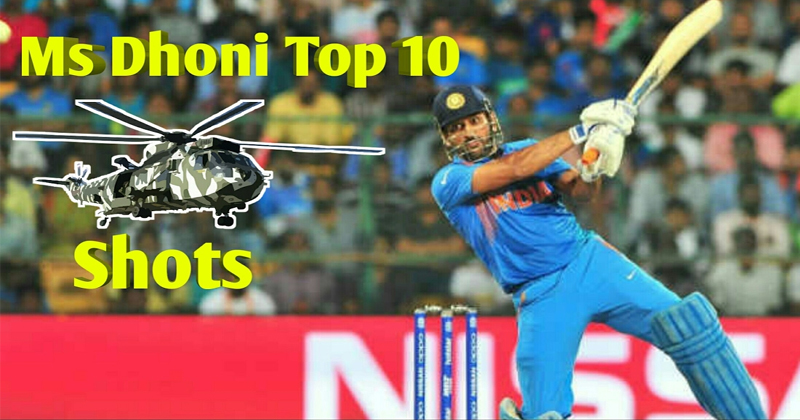 MS Dhoni and helicopter shots, this is a love story that every Indian Cricket fan wants to see over and over again. It doesn’t matter where MS Dhoni is playing, the moment he rotates his blade for helicopter shots, the world seems the stop in awe. The helicopter shot is not an easy one to play and mastering it is not like a walk in the park. It requires skill, power as well as hand-eye coordination in order to get it right and MS Dhoni has mastered it all.

MS Dhoni entered the International circle with a rustic charm coupled with a long lock and raw power that asked for attention from the work go. MS Dhoni has broken all barriers and has shattered myths like world class crickets hail from traditional centers, redefining the textbook on the way.

MS Dhoni is also one of the most successful captains the world has ever seen and the Jharkhand-lad first made headlines when he took a young Indian squad and captained them to the ICC T20 World Cup. from there on, there was no turning back for MS Dhoni and titles like ICC World Cup 2011, ICC Champions Trophy and two Indian Premier League Championships made him what he is today.

However, MS Dhoni has stepped down from the captaincy of the Indian side but during his illustrious career, which still has a couple of year’s worth of juice left, he has made the helicopter shot his trademark strike.

As we told you earlier, this shot requires sheer power, hand-eye coordination as well as the audacity to play and it still remains one of the most thrilling additions from the century, to the modern textbook. Moreover, it is an exclusive club as not many cricketers possess the ability to waft the blade with that extremely belligerent follow through after contact with the ball.

MS Dhoni usually plays the helicopter shot with the closed face of the bat while smashing the ball over long-on or mid-wicket. A great contact with the bat is what MS Dhoni needs and after that, on some occasions, he tends to ignore the airborne ball, adding more mystery as well as thrill to the shot itself.

Although MS Dhoni doesn’t play the helicopter shot too often these days, he will have a great opportunity of bringing back the destroyer in the upcoming Champions Trophy which can definitely create fear among the oppositions. Also, fans are also missing the powerful MS Dhoni, who used to bring the helicopter shot out in almost every innings.