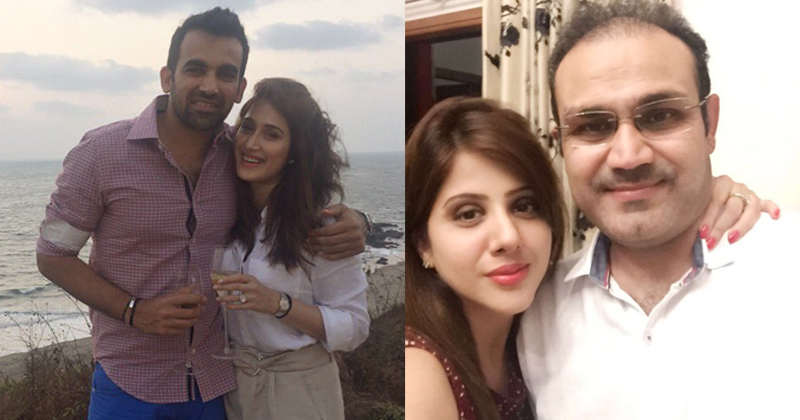 Virender Sehwag, the well-known Indian opener who made ever bowler he faced, witness his wrath on the field, is playing a somewhat similar innings on Twitter. Sehwag’s tweets have left us laughing out loud on several occasions and there was a time when nobody was able to better him in this department.

However, time has changed now and we have seen many of his colleagues taking the better of him on Twitter. First, it was Ravichandran Ashwin and now it’s Indian bowling ace and legend, Zaheer Khan. The former Indian pace sensation, who is leading Delhi Daredevils in IPL 2017 recently got engaged with ‘Chak De India‘ fame actress Sagarika Ghatge.

As expected, wishes started pouring in for the couple from all over the world with Zaheer Khan’s former teammates and colleagues taking on Twitter to congratulate the couple.

Welcome to the other side fella hope it's always bright for both of u many congrats and very happy for you guys @ImZaheer @sagarikavghatge pic.twitter.com/79r1fPDvoM

Zak the man. Many congratulations to both of you on the engagement @ImZaheer @sagarikavghatge https://t.co/lSv0FOqrQo

Congratulations @ImZaheer and @sagarikavghatge. Wish you both loads of love and happiness. A perfect match for life. #ChakDe https://t.co/vtUu1xOtu9

But all Indian Cricket fans knew that something was missing and that was Virender Sehwag’s Tweet on this occasion.

And then came this

While Virender Sehwag didn’t fail to impress us with his tweet, it was Zaheer Khan’s reply that had more wit and humor.

But it’s been a long time that Virender Sehwag is playing this game and his comeback left us in splits and laughing our hearts out.

She doesn't need Hockey ,she has Belan , with which we play gilli danda. https://t.co/TfOqm7VY93

One can easily fathom who plays ‘Gilli’ and who plays ‘Danda’ in this context.

It looks like man and wife jokes are ‘in’ these days because have seen similar stuff on Harbhajan Singh and Yuvraj Singh’s marriage too. But what these jokes cost our beloved legends at home is still a mystery but one thing is for sure, their lady loves must have used the ‘Balen’ after reading these jokes.