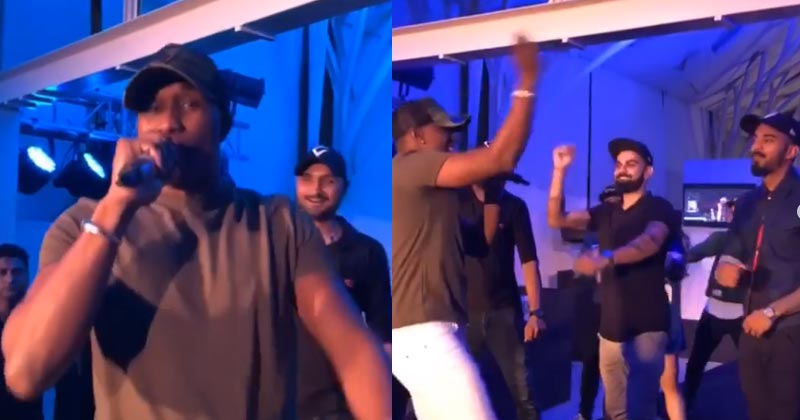 Our cricket players work hard on the field and harder when on dance floors. Legends have been told about the way our cricketers’ dance moves and party tricks, more than that there are tons of videos on social media to support this utter truth.

The same happened in a recent promotional event in Mumbai, where the champions of IPl and cricket world came together to shake a leg on Champions song by West Indies Cricketer Dwayne Bravo.

Virat Kohli, the RCB skipper, was seen dancing on the tunes of hit Champions with CSK’s Harbhajan Singh and KXIP’s KL Rahul while Dwayne held the mic. All of this happened at a promotional event in Mumbai where the cricketers united and can be seen having the best of time.

Check out the videos from the event over here:

When u have @virat.kohli @rahulkl @harbhajan3 on the same stage dancing to your new song it’s a great feeling.And big congrats 🎉 🍾 to Virat an his Launch #ONE8 #RunDWorld #Champion

Kohli and West Indies players like Dwayne Bravo and even Chris Gayle have an exceptional friendship between them which can be seen in every IPL series, as well as, in matches between India and West Indies. Virat Kohli has even featured in one of Bravo’s music videos.

Bravo recently called Kohli the Cristiano Ronaldo of cricket and compared Kohli’s talent and passion for the game to that of Ronaldo. “It’s (equation with Virat is) good. Virat actually played under-19 (cricket) with my younger brother Darren and I always tell my brother that Virat is a person he shall look up to, I am not saying that because I am here,” 34-year-old Bravo had said. “I actually asked Virat to talk to my brother personally about batting, about cricket. When I see Virat, I see Cristiano Ronaldo of cricket.

As for the IPL journey, while CSK shines bright with their performance in the league, with 2 wins and one loss (a close one), RCB has only one win and two losses (with the victory also being a rather unimpressive one). But as the history recalls, stats can fail when players and teams unite. So, let’s hope for an entertaining IPL in the coming matches too.