A tribute to Ellyse Perry bears a parallel with history, if one were to identify those holding the bat being soaked in colorful aesthetics, in contemporary cricket, where the sport is being poisoned by the need to entertain instead of ‘uplifting’ audiences. When Socrates was sentenced to death, asked to consume the poison chalice, a thought might have echoed in his mind. He may have pardoned the ignorant who were sentencing a wise man for being a fierce individual amid a time plagued by blind morals.

Cricket is changing; the moral question seems to be one that’s not being addressed sufficiently.

Who’s a real hero in an age craving for incessant gratification where audiences are being fed a sense of aesthetic comfort, where eyeballs are being catered to, instead of the sport appealing to one’s hopes and nerves. Yet, what comes across as a healing balm is that in Ellyse Perry, there stands an entertainer as also a great ambassador for the sport.

That leads us to a question. If Meg Lanning personifies true Australian grit, Megan Schutt underlines the keenness of bowlers to dominate in a sport often surrounded by feats of its batswomen, and Sophie Molineux stands for the enthusiasm of Australia toward a sport it excels at, so what does Ellyse Perry stand for? In an earnest tribute to Ellyse Perry, it may not be incorrect to suggest that she stands for everything that’s right about Women’s cricket, and thus, with the sport, in totality.

Perhaps what cricket needs today, in a time besieged by social media obsession, are those who can inspire a generation to look up to the sport; not merely seek entertainment from it.

That cricket has become an entertainment channel- you flip the remote as per your will- has got more to do with the audiences it caters to- marked by short attention spans, willing to seek comfort in instant gratification, seeking an excess of enjoyment over true sportsmanship, at times- than with the propulsion of T20s, a convenient blame for citing the ills cricket is putting up with.

At a time, where T20s are rising in women’s game but where an Ashes Day-nighter with a pink ball has been held, where a World T20, yet again, is being keenly looked up to so as to ascertain the real champions the game, Ellyse Perry stands at an intersection of competitiveness and an irrepressible enthusiasm for excelling.

It seems that she can do everything that her contemporaries cannot do, and with rich candor. She can pinch-hit in a T20 at the mid-lower order, without making bones about her customary batting position. She can take blinders whilst bowling a full spell in a Test. She can hit hundreds on a decisive session and remain as straight-faced in defeat or victory.

It also seems that there’s a lot of improvement needed for Ellyse Perry to conquer the heights that only she, it seems, stands capable of scaling. For instance, striking Test Cricket’s first triple hundred. Come on, what makes you think the right-hander can’t do it or, for instance, playing a Mithali Raj or Hashim Amla-style blockathon.

Perhaps her chirpiness (read quintessential willingness) to be too greatly involved in a contest for her own good, flirting with danger, undertaking the mortal risks of being dismissed in attempting an ambitious stroke can often hurt her craft. And maybe it’s this eagerness to be absolutely unrelenting that often exposes her to the rigors that only an excellent all-rounder- someone whose statistics are as attractive by her bedazzling physicality- bear.

And that Ellyse’s craft hasn’t dwindled in front of her god-gifted appeal pays testimony to the fact that Women’s Cricket has crowd pullers who look forward to being thrilled as much as having their hearts crushed by someone who’s perhaps the sport’s pin-up idol.

There’s way more to Ellyse Perry than her being a beholder of good looks and long, blond locks. That she chose professional cricket instead of soccer to inspire a generation of cricketers who are both- her proud teammates and figures from the opposite numbers who’re often in her awe- only adds more charm to Cricket’s equivalent of Aladdin’s Lamp; someone who can pull off unforgettable stunts, such as striking Women’s game’s first Test double hundred in a day-nighter, remain unbeaten and yet hardly breaking into a sweat.

That there’s a lot to be done by Perry, 28, in a format of the game that’s punching above its weight and successfully so, making giant strides in a structure that’s biasedly male-dominant marks both Perry’s future course of action and the expectations one has of her, none of which can be anything shy of remarkable.

For Perry mirros a Jack Kallis being more talkative, a more reliable Shane Watson, a Dwayne Bravo with a commitment to represent national duties as much as hitting the dance floor post an IPL-knock, and above all- the contributor to the chappel of excellence that is Australian cricket. 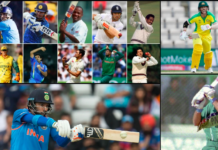