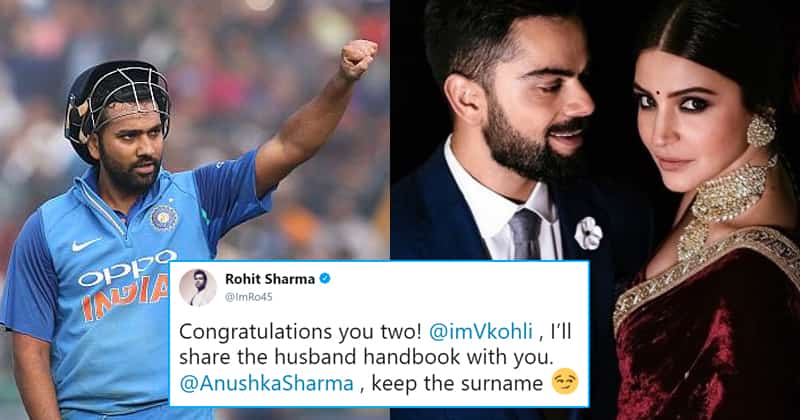 Last week ended up with being one of the most happening days for every Indian cricket fan as well as two of the most celebrated cricketers of the Indian squad, Rohit Sharma and Virat Kohli. While the skipper ended all rumors about his marriage with Indian actress Anushka Sharma with finally tying the knot in Paris, Rohit Sharma scored his third double hundred in ODIs while also becoming the first captain to do so.

But a Twitter thread between Rohit Sharma and Virat Kohli, which is going viral on social media, is what everybody is talking about as both the players have shown their witty-side while congratulating each other.

As news channels flashed headlines about Virushka’s marriage, Twitterati poured in their congratulatory tweets for the newly-wed couple and Rohit Sharma, too, joined the bandwagon, however, with a bit of advice for his teammate. Virat Kohli, today, came up with a cheeky reply which has made it even more hilarious than ever.

This Is How Rohit Sharma Congratulated Virat And Anushka

Congratulations you two! @imVkohli , I’ll share the husband handbook with you. @AnushkaSharma , keep the surname

With Virat Kohli just finding the time to reply to all the wishes, here are the words that the Indian skipper chose.

@ImRo45 @AnushkaSharma Haha thanks Rohit, and please do share the Double Hundred Handbook as well.

Whenever an Indian cricketer enters a new phase of his life called the married life, it is almost certain that his teammates never leave the opportunity to wish him in the wittiest way possible, however, it’s Virat Kohli’s reply that made this even more special.

Let it be known that Anushka Sharma had already tweeted a congratulatory note for Rohit Sharma on his 3rd double ton during the match between India and Sri Lanka.

Congratulations you two! @imVkohli , I’ll share the husband handbook with you. @AnushkaSharma , keep the surname

While Rohit Sharma has taken the reigns in Kohli’s absence which will also continue for India vs Sri Lanka T20I series, Virat Kohli is set to join the squad for team’s upcoming tour of South Africa.

As for Rohit Sharma and Virat Kohli’s recent performance, the duo is joint-second on the list of most centuries since 2015 with 11 tons each, just one behind Australia’s David Warner. While Kohli has taken 56 ODIs to register his 11 hundreds, Rohit Sharma has done the same in 47 matches.