Home Sports Cricket This Mauka Mauka Spoof On India Vs West Indies Is The New... 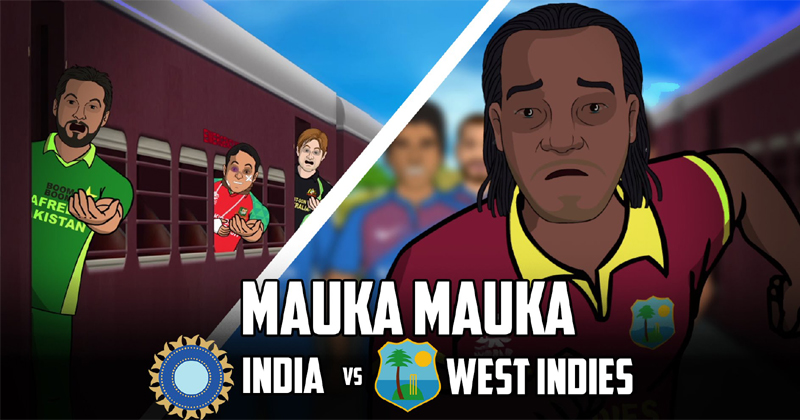 Mauka Mauka has become a synonym for the advertisement of any World T20 match and it ain’t stopping. The hilarious Mauka Mauka spoofs on India Vs West Indies keep coming one after another and it is hard to decide which one is giving us a better laugh ride. All of them have their own fun element and they all are funny as hell. Yesterday we posted a Mauka Mauka Spoof and we are sure it made you dissolve into laughter and now we found another spoof that will double up the fun of tonight’s match.

This Mauka Mauka spoof is posted on YouTube by Shudh Desi Endings and the concept they picked is as awesome AF. They have picked the last scene of all-time favourite movie Dilwale Dulhaniya Le Jayenge and turned it into animated spoof where West Indies player Gayle (Simran) wants to run away with Pakistan, Bangladesh and Australia but India’s Dhoni (Babuji) is not letting West Indies leave so easily. Even when Dhoni releases the hand of Gayle, Virat holds him back and he says “Sabko Thok Thok Ke Hi Ghar Bhejenge.”

World T20 mixed with the story of DDLJ is a mind-boggling concept and Shudh Desi Endings made it perfect. Indian team has been playing like a boss in this ICC T20 World Cup and if everything goes well, we might end up in finals competing against England and just imagine how hilarious those spoofs are going to be? Mauka Mauka !!