Home Sports Cricket This SUPER Cute Video Of Dhoni And Ziva (His Daughter) Will Make... 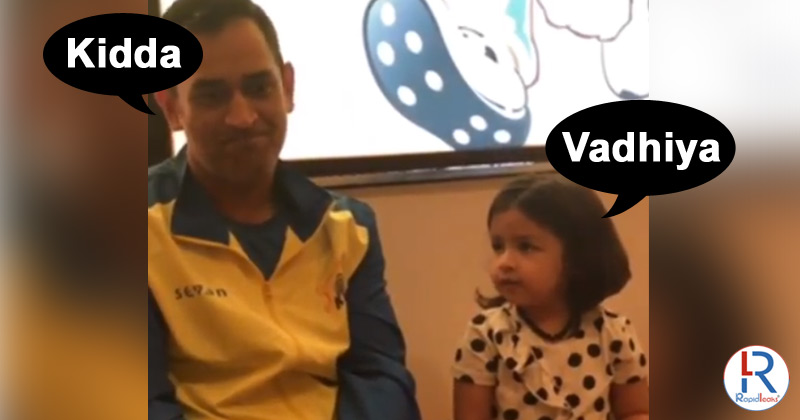 While MS Dhoni has been one of the most talented, as well as, most decorated leader of the Indian cricket team, his daughter is no less. Ziva is known for being super duper cute on her daddy’s Instagram and has always been the star of posts, and there is another proof of the same.

This time Dhoni and Ziva are together where daddy is testing her dearest daughter’s linguistic skills and not to mention, but Ziva indeed passed it with 10 on 10 scores. In addition to answering all of her daddy’s welcoming gestures in some of the most widely spoken languages, Ziva continues to look cute and absolutely adorable.

Aren’t they just the cutest?

Apart from MS Dhoni engaging with his family, major things are going on on the profession front. MS Dhoni led Chennai Super Kings played their first match of this year’s IPL and absolutely demolished Royal Challengers Bangalore. And, even though everything went in CSK’s favour, Captain Dhoni was not very happy with the pitch. In the post-match ceremony, Dhoni even said that the pitch needed to get better. Nonetheless, CSK has been a crowd favourite, ever since their comeback last year where they won almost every match and even the entire tournament.

Chennai Super Kings as a team has always been one of the best teams in the tournament with a big following of fans behind them, and the same could be witnessed last year. Team members are expecting the same enthusiasm from the fans, as well as, the same form in the IPL 2019, just like last year.

We are wishing the same for them.

Which is your favourite team in the IPL this season, tell us below in the comment section and you can also reach us on our social media.