Home Sports Cricket SRK Shows A True Sportsman Spirit And Parties With His Team After... 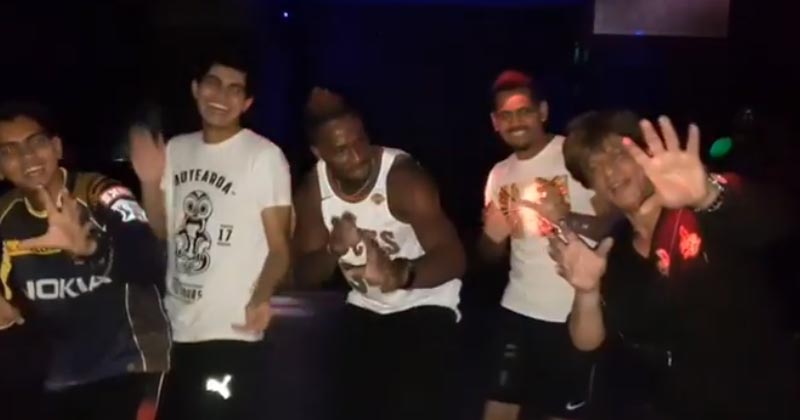 IPL 2018 has begun and with each and every match the viewers are in for a memorable game with mind-blowing twists and turns. Every match brings in a ton of loss of expectations because IPL is exactly the place where something you already expected never happens. And, the same cropped up on Tuesday night’s match between Chennai Super Kings and Shah Rukh Khan’s Kolkata Knight Riders.

The match was a roller coaster no one expected to be on and still enjoyed thoroughly. No matter which team you were supporting the end just made you grieve for KKR and feel blessed for CSK.

So, what does one expect after a grueling match, where a team which was obviously winning completely lost the game in the end, to do? Definitely not partying their heart out.

But that’s exactly the place IPL is, where rivalries are limited to the field and bygones of bad games are kept bygones of bad games. Which is why, rather than crying about their close call or discussing it alot, KKR decided to party. Along with all the star players of the team, even SRK was present at the venue. Not only present, he can be seen dancing and teaching few of his hook steps from ‘Chammak Challo’ to the star players of his team, including Andre Russell, Sunil Narine, Shubham Gill and Kamlesh Nagarkoti.

Andre himself shared the video on his social media and it will warm your heart. The video shows that not only KKR, but even their owner has an incomparable sportsmanship.

One can immediately feel the amount of fun everyone in the video is having which makes everything about it great.

Also Read: How CSK won a final over thriller against KKR

As for the match, it was nothing short of a thrill-ride one just couldn’t miss out on, with Andre Russell’s brilliant innings in which he scored a total of 88 runs in 36 balls, hit 1 four and 11 sixes.