Home Sports Cricket Shoaib Akhtar Hits Out At Pakistan Fans Who Criticized Him For Praising... 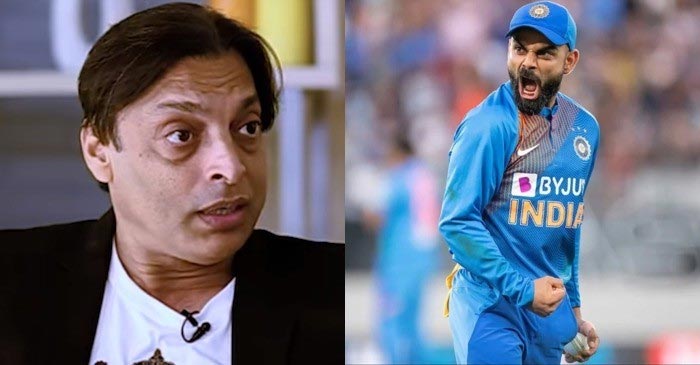 There’s been a growing trend of sorts, at least, in Pakistan’s culture where the cricket fans seemingly take offence to any former or current player in the light of their praising their Indian counterparts. If you haven’t taken note of this rather uncalled for development, then perhaps it helps to refresh one’s memories in terms of the recent developments.

Apparently, Shoaib Akhtar happened to lavish praise on two of the finest batsmen in the current team, one among them, the all-format captain of the international cricket team.

Virat Kohli, who took over the captaincy reins from former legendary cricketer and captain, MS Dhoni found amazing praise from the ‘Rawalpindi Express.’ Virat Kohli, for his fearless batting and technically correct approach to the game has swiftly emerged as contemporary cricket’s finest modern batsman. His batting adapts itself wonderfully to all formats of the game.

And its this versatility of Virat Kohli that was focused on by Shoaib Akhtar who not only lauded the right-hander’s dominant batting style but also appreciated his leadership tactics. In fact, that is not all. Premier opening batsman Rohit Sharma, widely admired for being the ‘Hitman’ of international cricket also found rich praise all thanks to Shoaib Akhtar.

But at the end of it all, there was a problem. Fans back in Shoaib Akhtar’s country didn’t really warm up to their legendary fast bowling making adulatory observations on the two Indian cricketers.

And because today, we are in an age where it’s easy to opine one’s feeling thanks to social media, fans were quick to take to the said platform in expressing their discontent with Shoaib’s stand.

But then, who can keep Shoaib shut or out of the picture for long? Not a man who shies away from calling a spade a spade, it helps to know that Shoaib Akhtar has hit back. He gave it right back to the very fans who were expressing their criticism on him admiring cricketers from the other side of the border.

The question is, what did the express pacer have to say and what sound bytes emerged in social media?

Here’s What You Need to Know

Why should I not praise Indian players and Virat Kohli? Is there any player in Pakistan, or all over the world, which comes close to Kohli?”

Is that all? In fact, the 45-year-old right arm pacer also added further by saying, “I don’t know why people are angry; they should go look at the stats first before criticising me,” Kohli added. “This is very strange. We all can see clearly he is the biggest batsmen in the world. He and Rohit Sharma are performing all the time. Why shouldn’t we praise them.”

Truth be told, it’s not the only time where a former Pakistani cricketer has generated ire for reserving good and positive words for an Indian. It wasn’t too long ago where former off spinner Saqlain Mushtaq, widely regarded as one of the most successful and talismanic spinners of his generation, came under the scanner for praising the leadership skills of none other than MS Dhoni. It was an action, for which, Saqlain was called out by the PCB who ended up reprimanding the widely-successful bowler.

His only fault being saying good things about MSD on his own YouTube channel, which wasn’t, in any way, related to the PCB. This rather bizarre trend has to be stopped- no? What do you think? What is the harm if you end up admiring something worthy in your competitors? Isn’t cricket called the gentleman’s game, after all?