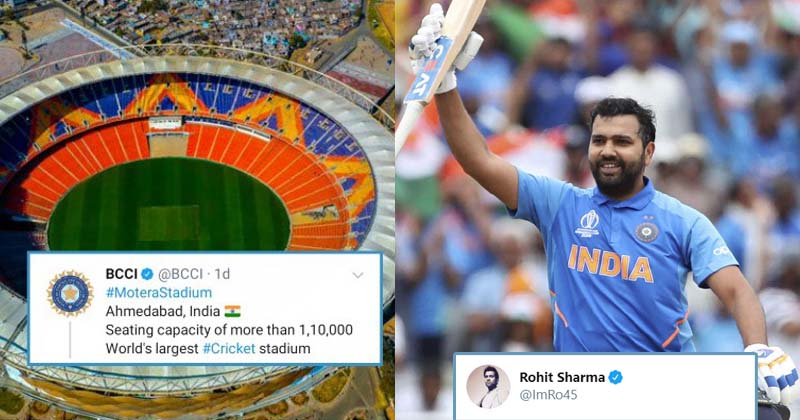 Great batsmen are about as different from good batsmen in the sport as is an all-terrain vehicle from a city-only or city-bound wagon. They are durable. They are exciting to watch. And above all- they are in a league of their own. Probably with tons and tons of runs in both T20 and ODI cricket and strikingly good credentials in the Tests, Rohit Sharma is that rare talent that’s as durable (or versatile) as he is exciting to watch. The ball travels a long distance and goes wide when it is connected from the blade of the great Rohit Sharma, popularly known as the Hitman.

Now, just imagine what might happen if the dangerous Indian opening batsman- also widely recognized as among the best in the business, at present- connects one directly from the middle of his bat at the largest cricket stadium in the whole wide world?

Now, to put it simply- all of this could lead to one thing: fireworks at the Motera stadium, in Gujarat.

While it’s a shame that recently the big-hitting classy opening batter had to stay out from the 2-match Test series, having also sat out of the recently-concluded ODI (leg of the Indian tour to New Zealand), one can’t wait to see the exciting prospect of Sharma dishing it out at the Motera in Gujarat!

In fact, it may not be wrong to suggest that the level of excitement and thrill would reach a crescendo if Rohit Sharma gets going (which he normally does) in the largest cricket stadium in the entire world.

Already, the Motera stadium in Gujarat’s Ahmedabad (the state capital) is trending everywhere and has attracted the attention of both cricket tragics from around the world and the devoted Indian fans.

It is but a matter of time before magnificent cricketing action takes place at the very destination where the sport is revered, often considered a mighty sub-religion.

That Rohit Sharma himself cannot wait to play at the famous Motera (in an important capital city of India) was understood easily from the enthusiastic tweet that the belligerent right-hander shared on her social media handle, wherein he stated:

“Looks amazing, heard so much about it, can’t wait to play there!”

The aforementioned were the exact words of one of the most explosive and attacking batsmen in world cricket, someone who alongside Virat Kohli, makes a dynamic presence in the craft of batsmanship.

But that told, there’s more. Rohit Sharma isn’t the only one looking forward to playing at the much-talked-about stadium as even Hardik Pandya took to the famous microblogging platform to express his desire to get out there and engage in cricket:

Remarking at the magnificent grandeur of the stadium in Gujarat, Hardik, who happens to be one of the most promising and popular all-rounders in the current context of the Indian side stated on twitter: “unreal!”

Perhaps, this incredible and telling single word definition of the grand stadium was enough to convey the essence.

Truly, at a time where thanks to the consistent achievements of Indian cricketers, the country is constantly reaching new heights, being celebrated for its all-round excellence (in all forms of the game) around the world, there’s hardly any doubt that thanks to slices of epic architecture: in the form of the Motera stadium: the country will further break new ground.