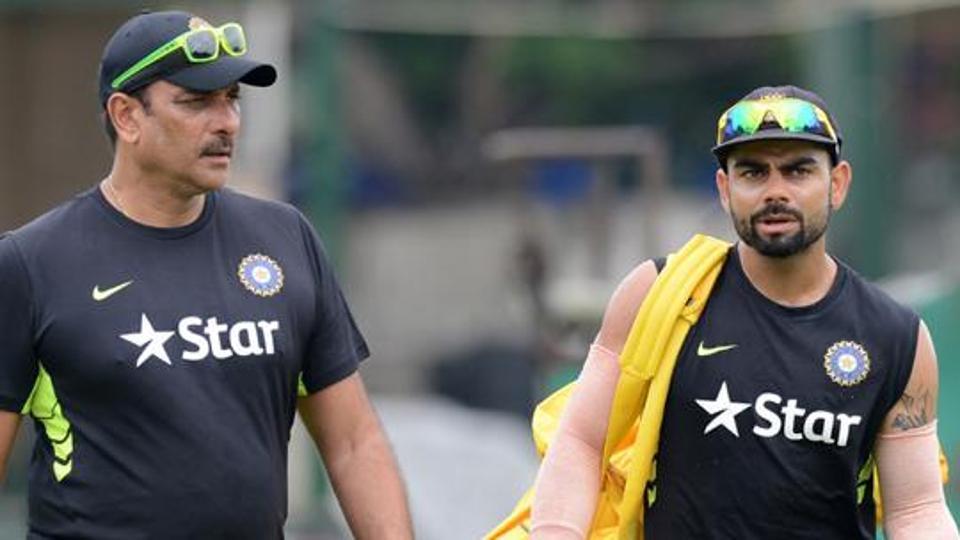 Ravi Shastri has been appointed as team India’s new head coach and he has pipped the likes of Virender Sehwag, Tom Moody, Richard Pybus and Lalchand Rajput for the position that Anil Kumble vacated citing differences with Captain Virat Kohli. Team India played the whole West Indies tour without a head coach after Kumble resigned by the fall of ICC Champions Trophy 2017.

Ravi Shastri, 55, was appointed by BCCI’s Cricket Advisory Committee (CAC) which included legendary players Sourav Ganguly, Sachin Tendulkar as well as batting great VVS Laxman. Ravi Shastri had initially not applied for the post and Virender Sehwag was touted to be the favorite for the job, but when BCCI extended application deadline till July 9, the former Indian team director (2014-2016) jumped into the fray and became the utmost favorite.

The CAC’s decision was scheduled for yesterday but Sourav Ganguly said that the committee wanted to consult Virat Kohli first. However, the committee, later said that the captain would not have a say in India’s new Head Coach appointment and they just wanted to have a discussion with the skipper before the official announcement.

While Zaheer Khan has been appointed as the bowling coach, Rahul Dravid will act as the batting consultant for team Indian for overseas tours.

Ravi Shastri, on the other hand, lost the job last year to Anil Kumble after being the team’s director for two years which also led to a heated confrontation between Ravi Shastri and Saurav Ganguly.

However, it’s in the past now and Ravi Shastri is back with his ‘one-of-the-boys’ approach that led the team to their first limited-overs bilateral series victory in Australia by 3-0 in a T20I series, winning the Asia Cup 2015 and achieving No. 1 Test ranking. However, India lost in the semi-finals of 2015 World Cup and the 2016 World T20.

That being said, Indian Cricket Team has had a glorious home season under Anil Kumble but the ICC Champions Trophy 2017 brought the Virat Kohli-led team under questioning for consistency. The team has not won a single encounter where the lineup was challenged and all they have witnessed are one-sided victories in ODIs.

With the ODI World Cup 2019 less than two years away, Ravi Shastri will feel the heat despite his relaxed approach and here are the challenges he will face as India’s head coach.

1. Building A Relationship With Captain

While Ravi Shastri shared a good chemistry with Virat Kohli during his tenure as the team’s director from 2014-2016 but in the wake of recent controversies, Shastri will have to keep the team together which has recently witnessed a new set-up.

The likes of Yuvraj Singh and MS Dhoni are finding is hard to cope up with the needs of the current team and Ravi Shastri would have to take some serious decisions in team selection for the upcoming World Cup 2019.

This is something India has been lacking as a team for the longest time. While during home seasons the team dominates over every opposition, the moment they start to tour, a decline in their performance becomes evident.

Moreover, the over-dependence on a handful of players is also a concern that Ravi Shastri will have to overcome.

4. Keeping Up With Zaheer Khan

Indian cricket team has always been known for its batting dominance but in recent years, fresh bowling talent has been infused into the squad but they haven’t managed to rise through the ranks. With Zaheer Khan taking up the responsibility, we might see those perfect Yorkers being shot at the batsmen but with so much of power being distributed among former greats, Ravi Shastri will have to make sure that the team stays cooped together.

The Virat Kohli-led team has struggled to perform under pressure and this is one of the biggest concern that the new head coach will have to face.

6. Gathering The Best From The Pool Of Talent

There are around 25 talented cricketers currently seeking a place in the main team and picking the best out of the best for the ‘Champions Of Champions’ is not going to be an easy task. Young players need some more on-field time to get the things going but who deserves a chance? This the biggest question.

Lately, Indian cricket squad has been playing defensive cricket and while batsmen are wasting too many deliveries, attacking bowlers have been used as stock bowlers rather than wicket-taking ones.

However, Ravi Shastri was one of those cricketers who punched way above his weight and has scored 3830 runs in 80 Test matches at an average of 35.79 for India. To add to that, he also has 151 Test wickets on his name, making him one of the most successful all-rounders to ever play for India. His experience as a director, player and as a member of BCCI’s advisory committee will definitely help India regain the lost grounds.

Be ready for some huge changes in the squad though!!