Nitish Rana, The Most Consistent Batsman For Mumbai Indians in IPL 2017

Nitish Rana, The Delhi Lad, is kind of a batsman to whom oppositions have feared the most and after dethroning the orange cap holder again yesterday, their fear certainly has risen even a notch higher.

Mumbai Indians No.3 batsman played a blasting innings of 62 off just 34 balls, decorated with 7 huge sixes, which helped MI to chase down a competitive total of 199 in just 15.3 overs.

One of the most exciting visions in T20 format is eyeing the ball and making it disappear over the boundary line, having been sent by a batsman’s sword. 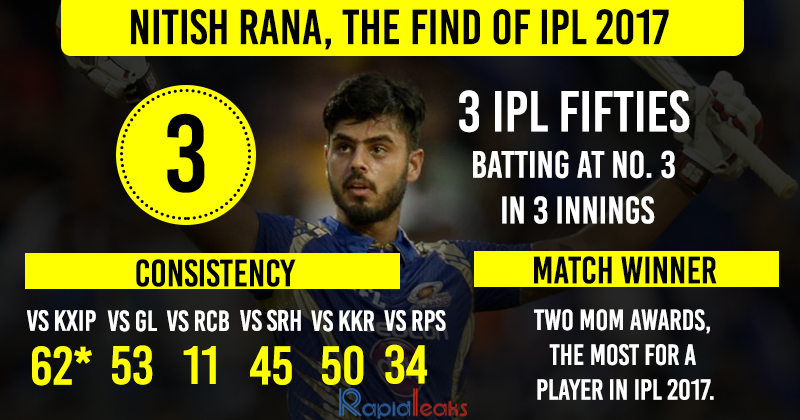 For a batsman like Nitish Rana, who can kill any bowling attack with his power hitting and tear any bowler apart with his clean strikes, no Cricket ground is too big when he joins the party.

When Nitish Rana hits them, they stay hit. Another fantastic performance by him!#KXIPvMI #CricketMeriJaan #MI pic.twitter.com/8ZVT8Z8KMP

Like the captain @ImRo45 said, "An incredible game to be part of!" This was our highest successful IPL run chase!#KXIPvMI #CricketMeriJaan pic.twitter.com/R6CTC44JqT

Nitish Rana hit 7 sixes and no fours. Can't remember the last time I saw that!

In the World of Cricket, there are some fabulous batsmen like Virender Sehwag, Gautam Gambhir, Shikhar Dhawan, Virat Kohli, who have their roots in Delhi and this youngster, Nitish Rana, is no exception.

The 23-year-old, left-handed batsman and right-arm off-break bowler, plays for Delhi at Domestic level and that is where he has flourished to make to the big-league.

There’s no denying the fact that IPL is way more than earning money for young players as they get to showcase their immense talent to the world and make it big, and Nitish Rana is not leaving any stone unturned to making the best out of this opportunity.

The Delhi boy is the current Orange Cap holder(leading run scorer) of the IPL 10.

Nitish Rana is not letting the Orange Cap go easy this season. It's back with him!#KXIPvMI #CricketMeriJaan #MI pic.twitter.com/NfVr1ruIwz

It’s every youngster’s dream to wear Indian jersey and Nitish Rana is definitely the ‘Find’ of IPL 2017. I wish that he will carry on his form and become the best emerging player of Indian Premiere League season 10. If this turns out to be true, we will soon see him smashing the ball once again but as a ‘Man In Blue’.