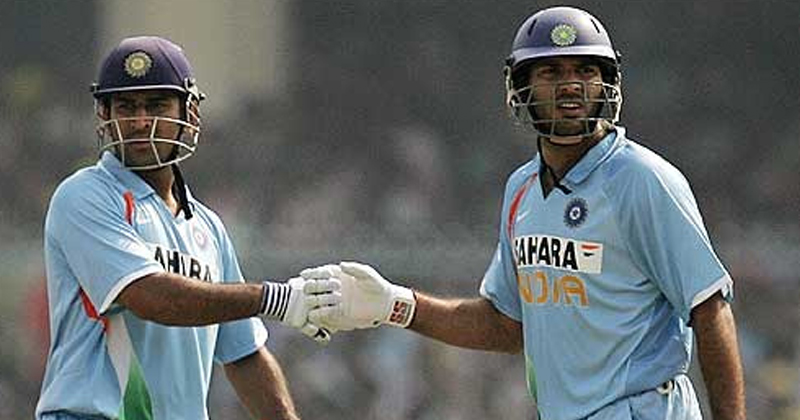 It is rather exciting to see certain trends being repeated in cricket and coincidences of what happens on the field can sometimes even turn out to be a bizarre fact, as well, which, at times, can be very captivating. You might be wondering what trends or coincidences are we referring to. Well, to say the least, MS Dhoni has its own share of historic moments but from the non-strikers end.

The world knows MS Dhoni as the best finisher and one of the cleanest yet powerful hitters of the cricket ball. But the former Indian ODI has had the privilege of being the best non-striker as, well. It won’t be wrong to say that MS Dhoni has been a driving force behind some of Indian cricket’s biggest achievements and knows everything about finishing off a game.

MS Dhoni generally comes lower down the batting order, and he unfailingly stays till the end. It doesn’t matter if he is hitting the ball or not, the one thing that he always does is handle the pressure from one end and motivate his partner to let go of his fears.

When the other batsman is on the go, MS Dhoni plays the ideal foil and gives him enough deliveries to pace the innings according to the situation. Some of the recent examples of his greatness are the India vs Sri Lanka 2017 ODI and the one played against Australia in home conditions, where he gave Bhuvneshwar Kumar and Hardik Pandya a chance to open their wings, respectively.

Moreover, MS Dhoni’s connection with luck is also well-documented and he has had the opportunity to be present as a non-striker and to have witnessed some greatest moments of Indian batting exploits from the best position on the ground.

On that note, we would like to take our readers down the memory lane and relive the moments when MS Dhoni became the Charioteer for the ones who created history.

MS Dhoni: 5 Times When India’s Best Finisher Was Part Of History But From The Non-Striker’s End

During the 2007 World T20 match against England, Yuvraj created history by hitting 6 sixes in a single over off Stuart Broad after a verbal spat with Andrew Flintoff while also completed the fastest fifty in the process. And when the demolition came to an end, a thrilled Yuvraj walked over to punch fists with MS Dhoni, who had the best tickets to witness the carnage.

In the fifth game of the next edition of T20 World Cup, the inaugural champions were pitted against South Africa and the likes of Dinesh Karthik as well as Murali Vijay failed to give India a good start. But the world was to witness Suresh Raina‘s batting prowess as he was destined to rise to the occasion in the absence of batting legends like Virender Sehwag, Sachin Tendulkar, and Gautam Gambhir.

As his stay in the middle got longer, his shots become more precise and well-timed while a special treatment was reserved for the likes of Steyn, Rory Kleinveldt, and Morkel brothers. MS Dhoni walked in after Yusuf Pathan lost his wicket midway through the 19th over, and registered a quick cameo to push the scoreline past 180 runs.

Meanwhile, Suresh Raina, on 95, hit a six to become only the third international batsman to have a T20I century on his name cricket.

While Sachin Tendulkar became the youngest Test centurion for India at the 17 in 1990 with his unbeaten 119-runs knock against England at Manchester, 20 years later, the ‘little master’ still possessed the power and stamina to score centuries for his country.

In 2010, Sachin Tendulkar became the first to cricketer to reach the 50 Test centuries and he did it against one of the most dominating bowling sides of that time, South Africa. He drove a full ball from Steyn between the covers to reach his 50th Test century, while running across with his arms in air and the crowd cheering in celebration. As Sachin looked up to the sky, it was MS Dhoni by his side and after acknowledging the crowd, he fist-bumped MS Dhoni, to let the world know that the ‘Master Blaster’ was back at scoring ionic again.

The same year in which he scored his 50th Test century, it was time for the most celebrated Indian cricket to do something unimaginable in One Day Internationals, as well. The same opposition but a different format and just another day in the life of Sachin Tendulkar.

After opening the batting with Virender Sehwag, Sachin Tendulkar never let the likes of Dale Steyn, Langeveldt and Jacques Kallis settle down by playing some of the classic textbook strokes and using his feet to counter the spinners. Yusuf Pathan went back after a quick 36-runs knock, and captain MS Dhoni came to the crease with the score reading an exact 300.

Blasting a 35-ball 67, he became the perfect partner for Sachin as the duo took the score past 400. However, at one point, with MS Dhoni getting most of the strike, it felt like Sachin would marginally fall short of the double-ton but the little ‘master’ eventually got there in the final over after steering a full ball to point to reach the milestone. MS Dhoni was, again, had the opportunity of witnessing history at the other end.

Rohit Sharma, who made his debut as a middle-order batsman, was going through a rough patch in his career, failing to live up to his potential. His switch to a top of the order batsman turned out to be a career-changing decision, as he then evolved into a completely different player.

The change got its proof in November 2013 against Australia, when Rohit Sharma became only the third batsman, after Sachin and Sehwag, to score a double-century in ODIs, a feat which he also repeated the very next year.

Off the first ball in the last over of the innings, Rohit went inside out off Clint McKay’s delivery to notch up his double ton and a smiling MS Dhoni walked up to him from the non-striker’s end for doing something that he had been accustomed to, congratulating his teammate on creating another historic moment.

So these were the few moments which made us believe that M.S Dhoni is one of the Luckiest players in the World and if he hadn’t been at the non-striker end then these batsmen might not have the needed confidence to register these remarkable history-defining achievement.