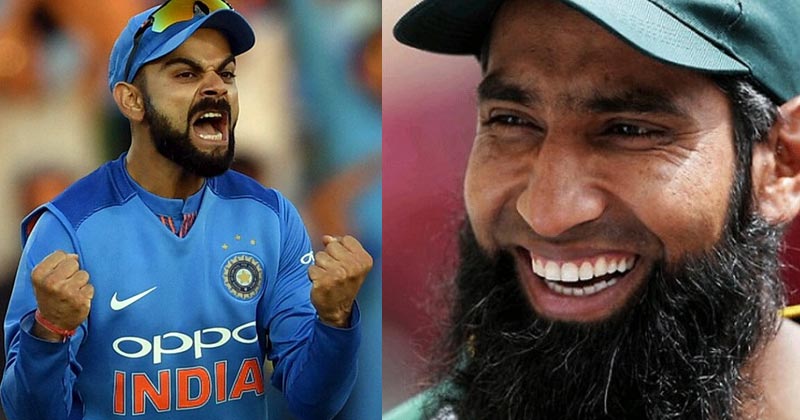 Praise is always good. Who doesn’t want it or like it? If you were to think of it, then positive feedback is all that’s needed to light up one’s day. It just happens to be one of those things that can simply charm one’s day.

But then, while it’s easy to praise someone, what matters most- at the end of the day- is who does the praise come from.

If it stems from quarters of ignorance then what’s the point anyways? But if it emanates from a well-rounded personality, someone meaningful then it becomes relevant and well-meaning, what do you think?

But that told, nothing matters as much or seems as special as an already well-established and widely-popular person sparing a few thoughts and words of encouragement for another soul.

And when a good word comes from a renowned batsman, who chooses to shower praise on another, it speaks a lot about the giver’s modesty and groundedness.

In his own light, Mohammad Yousuf- one of Pakistan’s leading lynchpins of the late nineties and early 2000s- is a batting legend. During his active or playing days, he was as difficult to dislodge from the crease as was a Rahul Dravid or Shivnarine Chanderpaul in their prime.

His ability to dig in, and make it count when the chips were down has long been hailed and recognized for lending the team a spark of brilliance it so often sought.

But Mohammad Yousuf, when contacted recently, during a social media interaction, had all the polite and positive things to say about a man from the other side of his country’s border.

A man that goes by the name of Virat Kohli.

The current India captain- all format leader- has earned rich praise from the former Pakistan right-hander, a man who conjured as many as 17,000 runs, and not to forget, someone who struck 39 international centuries.

That’s a lot of substance to prove Yousuf’s credentials as not just an all-time great Pakistan batsman but among the finest on his day.

So what did Mohammad Yousuf say that resonated so well across social media platforms?

When asked a simple and clear question- as to who’s the world’s premier batsman, the 45-year-old replied with a clear, “Virat Kohli!”

In fact, that wasn’t all. The very fact that he put Virat Kohli- someone who topped the ODI batting charts in 2019- on top of his list ahead of several big names was the real icing on the cake.

So what transpired between the fan who had asked Yousuf the question and the great batsman?

Well, all one needs to know that Virat Kohli came right on top and later, Yousuf shared the following as a frank response through a tweet,” No 1 Sachin no2 Lara No 3 Ponting..no 4 Kallis no 5 Sangakara!”

That wasn’t all. Praise was also reserved for Virat Kohli’s opposite number from the Kiwi camp. When asked to name the best limited-overs captain in the game at the current moment, Yousuf named New Zealand skipper Kane Williamson.

And that’s hardly a surprise- isn’t it? After all, both Virat Kohli and Kane Williamson have, quite simply, beautified the art of batting and made the game much richer with their useful contributions.

At the end of the day, one does realise just how grounded a personality is Pakistan’s true gem- Mohammad Yousuf.