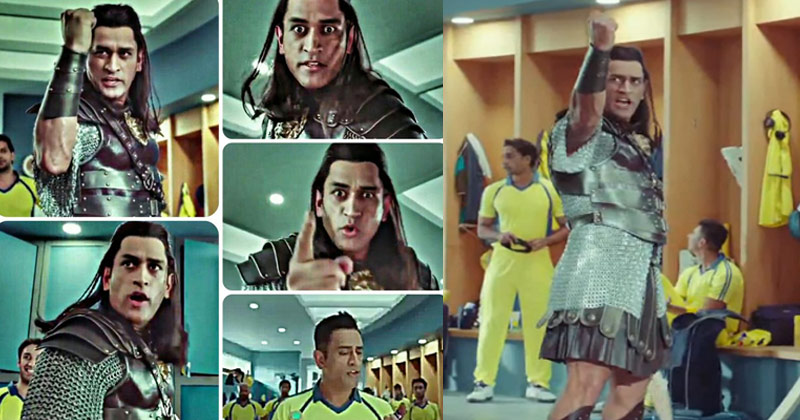 Mahendra Singh Dhoni, the man surely knows how to stay in news. Remember when he started as a freshman in Indian cricket team, one thing that gained attention equally as his continues wins and impeccable captainship was his long hair? Well, don’t we all miss them?

From brown to a semi blond, those long locks made every girl’s heart fall hard for him. Dhoni’s hair was so famous that even former Pakistan President Pervez Musharraf complimented him about them and asked him to never cut them off.

However, owing to a mannat, he not only cut them but actually went bald. Since them, his fans are dying to grow them long but it never happened.

Surprisingly, the longing wish has been fulfilled and Dhoni is back with his long locks. Not only that, he has donned an Avatar of a warrior which for some reason reminds us of Dharmendra from Dharam Veer.

Before you get all perplexed, let us clear the air for you. Dhoni recently did an advertisement for Snickers where he appeared as a warrior who has long locks and his fans are going gaga over it.

Here is the video!

The famous hairstylist Sapna Bhavnani, gave him this new look and also posted a cute video of her and Dhoni where they are twirling together.

Yes, they both are wearing short skirts. Well, meanwhile Dhoni’s fans poured out their feeling on Twitter and the reactions are heartwarming.

I still love mahi's long hair instead of short hair??

Now the real hitter Dhoni is back

M S Dhoni new look 🙂
Long hair, golden days?
He was even suggested not to cut his hairs by the ex-president of Pakistan.

@msdhoni in a new Avatar!
Once again with long hair for an ad!
Thank you @Snickers_IN for this ad!#MSDhoni #Dhoni pic.twitter.com/yDM7v2XlOb

We miss those long locks Mahi!