One can just not forget the first ever IPL match in which Kolkata Knight Riders and Royal Challengers went head-to-head to for a breathtaking display of T20 cricket as Brendon McCullum led a one-man assault on RCB while destroying the home team.

Brendon McCullum blasted an unbeaten 158 off just 73 deliveries to propel Kolkata Knight Riders to an imposing total of 222 for 3. The punch-drunk RCB was in no condition to fight back and collapsed on 82 to lose by an embarrassing as well as a huge margin of 140 runs, which is the fourth-largest defeat of the tournament. 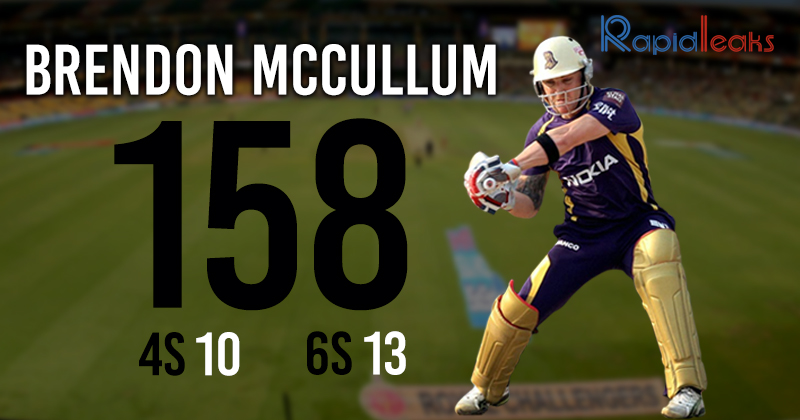 It’s been a decade since the inaugural IPL match was played and KKR has won the title twice while RCB, despite having some great names on the lineup, have failed to make their presence felt in the tournament.

Cut short to IPL 2018, it is nothing but an irony that exactly a decade after, Brendon McCullum is going to play for the same team for which he once became an unforgettable nightmare. During the IPL 2018 Auction, Brendon McCullum was bought by Royal Challengers Bangalore for Rs 3.60 crores and now he will join the likes of Virat Kohli and AB de Villiers for IPL 2018.

How things will work out for the trio on the field, is an altogether different thing, but fans are indeed excited about this new RCB lineup for IPL 2018. On the other hand, Brendon McCullum too has shared his excitement via Twitter over the prospect of playing with de Villiers and Kohli.

Very very happy to be joining up with @RCBTweets. In @imVkohli and @ABdeVilliers17, they are two blokes I have dreamed of playing with!

As for the whole RCB squad, Bangalore retained Kohli, De Villiers, and Sarfaraz Khan, ahead of the IPL 2018 Auction and used the Right to Match (RTM) card in order to retain Yuzvendra Chahal while bringing the likes of Chris Woakes, Washington Sundar, Quinton de Kock, among others to their squad.

With the absence of Chris Gayle in the squad, who was bought by Kings XI Punjab (KXIP) for his base price of Rs 2 crores, all eyes will be set on Brendon McCullum for helping Kohli to clinch his first ever Indian Premier League title.