IPL 2017 has been kicked-off with a rather exciting start as we got to see a blistering knock from Yuvraj Singh that led Sunrisers Hyderabad to a 35 runs win over Virat-less Royal Challengers Bangalore and now it’s time for another nail-biting clash between Rising Pune Supergiants and Mumbai Indian on 6th April at Maharashtra Cricket Association Stadium, Pune.

With new captain Steve Smith at the helm and MS Dhoni playing, for the first time, without the captain’s tag, the Rising Pune Supergiant (RPS) would be looking to cross their first hurdle Mumbai Indians, who has dominated all their clashes at this venue.
RPS has lost all four home games while MI has won all the three matches played at this venue. Interestingly, RPS made its IPL debut against the same team and won it with all the glory that one would expect from a new team. However, in the next head-to-head, Ajinkya Rahane stood strong to help his side take away the match, bringing the tally to 1-1. 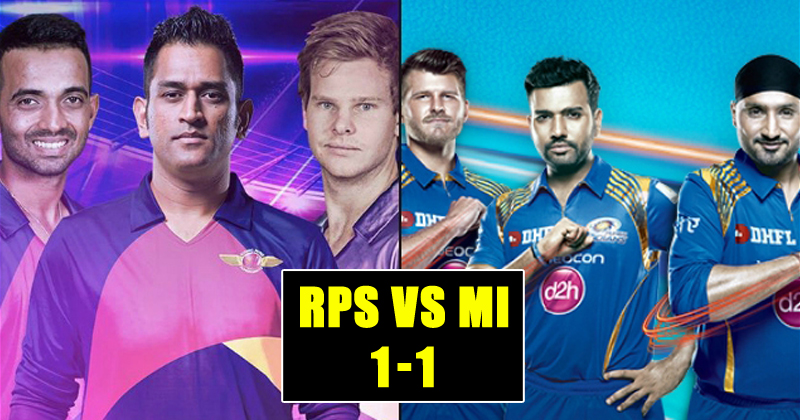 As for Mumbai Indians, Rohit Sharma is returning to the big-boys after almost five months. Moreover, the skipper is not the only one lacking in match practice as the same goes with his teammates Mitchell Johnson and Hardik Pandya. Despite inconsistency being the major factor that led MI to an early exit last season, the team has been a notable one for turning things around after uneventful starts and this time, Rohit Sharma will be eager to hit the straps straight away.

Players to look out for

Rising Pune Supergiants (RPS) have the players who are capable of turning fortunes single-handedly including skipper Steve Smith, wicket-keeper batsman MS Dhoni and South Africa’s Faf du Plessis. The newly roped in English all-rounder Ben Stokes, who was bought for Rs 14.5 Cr, and Imran Tahir are some names on whom RPS would be banking upon.

Mumbai Indians, on the other hand, has not seen many changes in their squad and has stayed away from the injury bug. They have always clubbed young and local talent together, so, a combination of local lads with international stars might bring up another good show for Mumbai Indians. Rohit Sharma’s form will be the most important player for the side, while big hits, as well as an all-rounder performance, will be expected from Kieron Pollard and Jos Buttler. Veteran spinner Harbhajan Singh’s experience will also add to the advantages for the franchise.

That being said, here are the stats that would matter in IPL 2017, RPS v MI match.