IPL 2017 is the 10th edition of one of India’s biggest ever league and matches like these are the ones that have made this tournament an instant hit as well as a festival for Cricket lovers all over the world. Moreover, while everybody was preparing for the IPL 2017 play-offs, Kings XI Punjab have made an exceptional comeback and answered all its critiques in the face.

Wankhede Stadium witnessed a match where the hosts entered to leave as the most dominant side in IPL 2017 and Punjab, on the other hand, was looking to stay alive in the competition. Everyone was expecting the unexpected and rightly so, making runs seemed as easy as waving a hand during this clash. Chaos broke when Punjab gave a target 231 runs and Mumbai Indians, surprisingly, managed to come very close to making it a successful chase.

MI opted to bowl first and there was not even a single Kings XI Punjab batsman that was not playing at his prime. It started with Martin Guptill and Wriddhiman Saha’s bombastic first wicket partnership that made Wankhede, ‘Bangistan’.

Martin Guptill added 36 runs in just 18 balls before being sent back to the pavilion by one of the best all-rounders in India, Hardik Pandya. However, it was an innings that gave the pace and confidence KXIP needed.

And then it was Wriddhiman Saha’s turn. This wicket-keeping batsman has been consistent throughout the IPL 2017 and it was his day to make it big this time. While it was a gamble for Punjab to send him on number two, h didn’t disappoint anyone and went on to register one of the most classic yet ballistic knocks ever.

With the help of 11 boundaries and 3 sixes, Saha went to make 93 runs off 55 balls and you can relive his knock here.

Even the skipper, Glenn Maxwell joined the party and brought fury to the ground with his non-stop boundary breaking strikes and added 47 more runs to the scorecard off just 21 balls with the help of 2 boundaries and 5 huge sixes.

It was Mumbai Indians’ turn to do the unexpected and make this a successful run chase and would have gone in the history books of Indian Premier League. Lendl Simmons and Parthiv Patel gave a ballistic start to MI innings and added 99 runs, in 8.4 overs, for the first wicket before Mohit Sharma turned savior for Punjab and gave the much-needed breakthrough in the form of Parthiv Patel’s wicket.

However, the little guy left us impressed before going back to the pavilion and here is his 38 off 23 balls innings.

In the very next over, Glenn Maxwell turned bowlers and send the other half of the opening pair, Lendl Simmons (59 off 32), to join his partner. However, it was Martin Guptill’s exceptional effort at the boundary that made it possible and it is worth watching over and over again.

Kieron Pollard turned the tables single-handedly, with a little yet substantial help from Hardik Pandya (30 off 13), and took Mumbai Indians to the brink of winning this high scoring match.

Watch Kieron Pollard going all out against Punjab’s attack

Sandeep Sharma and Mohit Sharma were given the responsibility in the last two overs and didn’t disappoint their skipper and gifted Glenn Maxwell led KXIP a breath of relief as the team still remains in the competition. 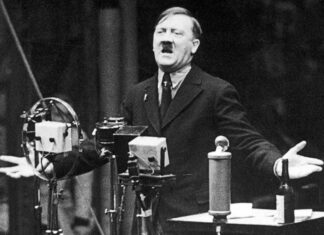 Dev Tyagi -
Even as over seven decades have passed since the horrific events of the Second World War, which led to the mass extermination...