India vs Sri Lanka: Here Is Why Yuvraj Singh And Suresh Raina Were Ousted From The ODI Series.

Making it big in any sport is not an easy nut to crack for any athlete and every now and then, they have to undergo several fitness tests which lay the path of their future with the team. Such has been the case with Indian Cricket team as well.

With skipper Virat Kohli and head coach Ravi Shastri having often said that fitness will be the main criteria for a player’s selection in the squad, senior cricketers are finding it hard to cope up with the new challenges as Indian team pace towards the 2019 World Cup.

Two Indian players, or we can say match turners, were subjected to a similar test and failed to make their way for the India vs Sri Lanka ODI squad. You might have guessed it right but for those who are still wondering, it were Yuvraj Singh and Suresh Raina.

Yuvraj and Raina were once the swiftest and fittest players in the Indian team as the latter was often seen at the slips while Yuvraj was a regular in the 30-yard circle. Both were also good at running between the wickets, which made them the most destructive asset for the Indian squad.

Coming to 2017, Yuvraj Singh and Suresh Raina are waiting for a comeback, and were hoping to play among the Men In Blue in the India vs Sri Lanka ODI series but they both failed in the Yo-Yo test conducted in Bengaluru.

What is Yo-Yo Test? 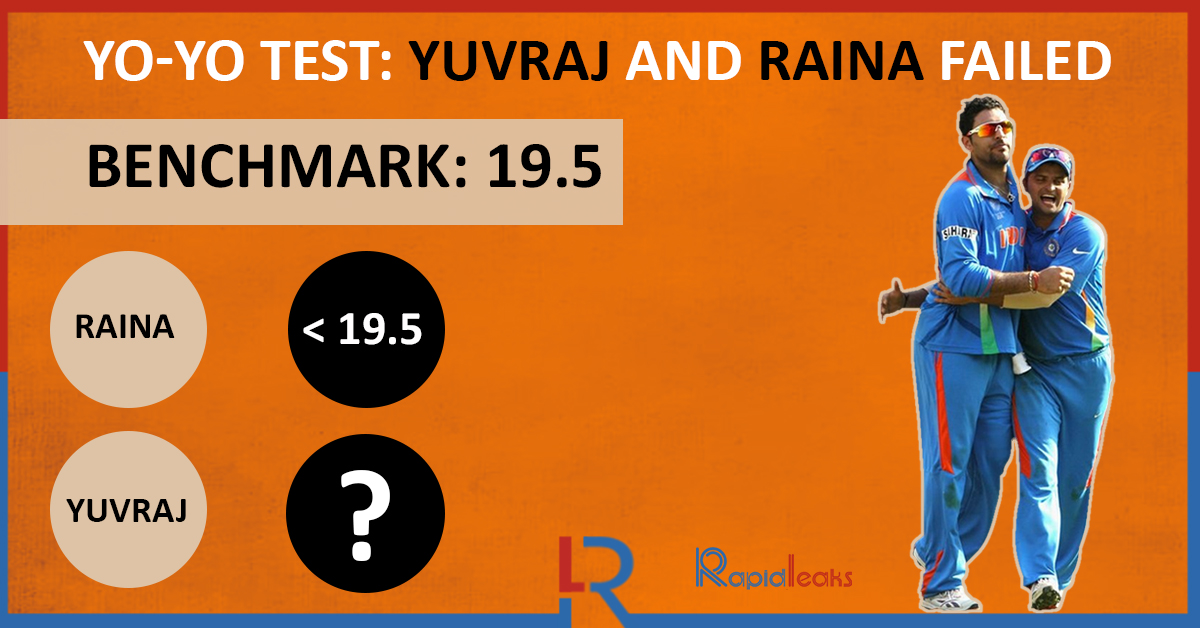 The ‘Yo-Yo’ Test is one of the most important endurance tests that cricketers undergo before their selection and the duration of this test is about half-an-hour, however, withstanding the whole ‘Yo-Yo’ test is not possible.

It measures a player’s ability to perform repeated interval runs in an extended period of time to check their endurance levels. Players get a brief pause between each set of runs and the test requires cones to be placed in two lines with a distance of 20 meters.

Starting behind the 5m marker, the individual begins running 20m towards the final marker on the instructions by an automatic audio track. After reaching the marker, he/she needs to return back to the first marker before the next beep.

The athletes are then provided with an ‘active recovery period’ of 10 or fewer seconds after which they have to set themselves back at the original marker for the next sprint which is even faster than the previous one. If any athlete fails to make it to the other side before the beep, a warning is given and if they fail to keep up with the pace, it’s the end of their ‘Yo-Yo’ test.

For the current Indian team, the acceptable Yo-Yo test score is 19.5 on which the selectors picked their squad for the India vs Sri Lanka series.

It should be noted that Australian Cricketers score 21 on an average in this test and in the Indian squad, Virat Kohli, Manish Pandey, and Ravindra Jadeja are the only players who hit the benchmark regularly while others score 19.5 or above.

Now coming to Yuvraj Singh and Suresh Raina, the former barely managed to score 16 while Raina scored marginally less than the acceptable benchmark for selection.

Considering Yuvraj Singh’s poor form, selectors have got no other option other than ignoring the two-time World Cup winner as well as one of India’s biggest match winners in limited-overs cricket for the India vs Sri Lanka ODI series

For Suresh Raina, the T20 specialist who was looking for a comeback after a long lay-off, the story seems more or less similar and with poor fitness levels, he had got no chance of making it to the team, which is currently considered one of the fittest in the world.

On the other hand, MS Dhoni, another senior player, passed with flying colors as ran the 20-metre race in just 2.91 seconds while completed a ‘run-a-three’ race in 8.30 seconds.

Coming back to Yuvraj Singh and Suresh Raina, and their ousting from the squad for the India vs Sri Lanka ODI series, the door seems to be shutting down fast for them.

But can Yuvraj and Raina match the fast-evolving fitness levels to make a comeback, or the lack of top-level endurance will lead to an end of their international career?