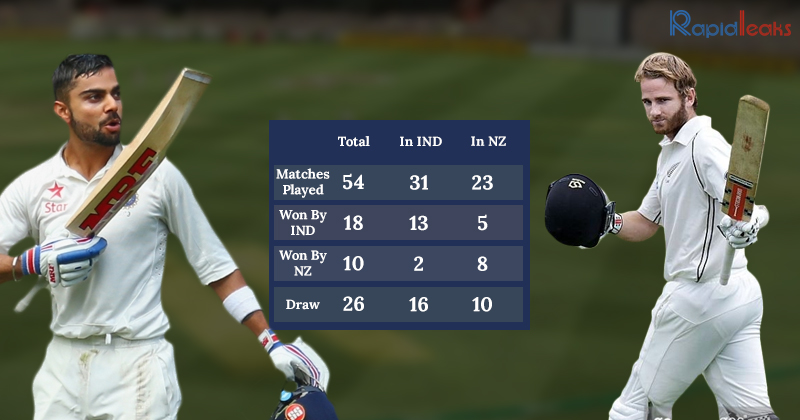 New Zealand is all set to play a test and one-day series with host India comprising of three tests and five one-day matches starting from 22nd September at Green Park Stadium, Kanpur.

With India playing at home they will be the overwhelming favorites to win the series but Virat Kohli and his men can’t take the Black Caps lightly. They have some serious names in their lineup that are capable of destroying their opposition either with the ball or bat.

Recently Kane Williamson became the youngest player to score centuries against all Test playing nations and he must continue to carry on his rich vein of form if the Kiwis have any chance of upsetting India at their own backyard. New Zealand lost their last Test against South Africa and would look to come well prepared to counter Indian spinners.

India, on the other hand, has a very good record in Test cricket in the recent past. They had defeated New Zealand 3-0 at home last year and their spinners played the most important part in dismissing the men in black batsman cheaply. They would also be wary of the fact that Kiwis also have quality spinners in their ranks and the idea of preparing rank turners could actually backfire. With a solid and settled batting line-up, the batsmen will look to score big and bat the Kiwis out of the game.

If India can defeat New Zealand in at least four of the five one days in this series then there are chances for the Indian team to rise to the second position where the Kiwis currently stand and winning the test series will ensure No.1 spot for the Indian team in test rankings.

Record of their previous encounters In One Day Internationals:-

Record Of Their Previous Encounters In Test Matches:-

New Zealand does not have a very good track record in India both in Test and ODI matches as India has won 21 out of 27 ODI matches in ODI and 13 out of 31 tests with New Zealand winning only 2 of them played in India. If the pitches are going to behave anywhere similar to those that were rolled out for South Africa last year, the Blackcaps captain and their best player may find himself firefighting the tail. In 12 Test matches in the sub-continent, Williamson has scored 1000 runs, with four centuries and four half centuries.

On India’s front, the recently concluded Duleep Trophy has served as an ideal preparation for the upcoming Test series against New Zealand. Now we have to see how Kohli’s men will take advantage of this experience and compete with our guests.