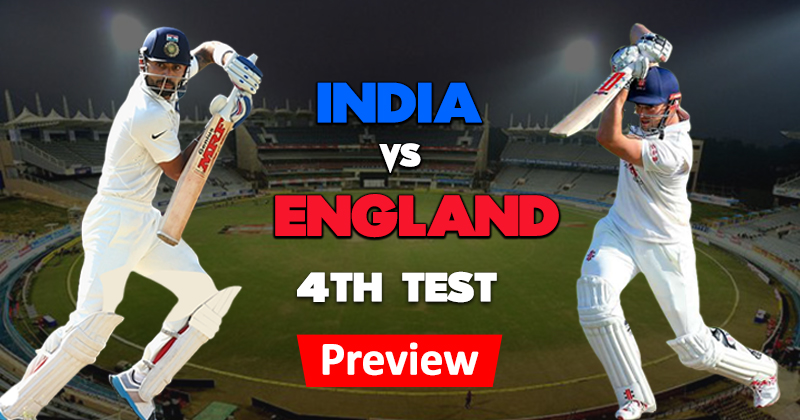 India is all set to play against England in the 4th Test match of the India vs England 2016 series, which the home team is leading by 2-0. The match will be played at Wankhede Stadium, Mumbai on 8th December and India will kick start the event being absolute favorites.

Earlier, there had been reports, suggesting that the Wankhede pitch will completely favor the spinners and Indian spinners have already dominated the first half of the tournament. R.Ashwin and Ravindra Jadeja have embraced a new partner in form of Jayant Yadav and the player, who made a debut in this series, had been able to deliver some important breakthroughs throughout the series.Yadav had also been vocal through his bat and have scored some match winning runs for the team.

The duo of Mohammed Shami and Umesh Yadav has brought the perfect synchronization between pace and spin, leaving England batting order to tatters. However, Mohammed Shami is likely to rest during the game (it has not been confirmed) and Bhuvneshwar Kumar may get introduced for the first time in this series.

Coming to the Indian batting lineup, all have ended well in this series with the tailenders also contributing some important runs to the scoreboard. However, Ajinkya Rahane, the wall of upper order, has suffered a finger injury and will not be able to take part in the remaining matches of the series. Manish Pandey has been called up as a replacement of Ajinkya Rahane, However, KL Rahul and M Vijay have recovered from injury, now it will be interesting to see, who will get a chance to play in the series decider.

Parthiv Patel has nothing to worry about as the player has proved his mettle by scoring a combined 100+ runs in the 3rd test match and that too, while making a comeback after eight years. However, if we talk about his wicketkeeping performance, it has not been up to the mark.

England has also faced the wrath of injuries as Haseeb Hameed’s injury has made the way for Keaton Jennings in the England Squad. The latter will be debuting in Test Cricket.

With Stuart Broad still dressing his injuries, the rest of England’s squad may remain same as the one seen in Mohali. Alastair Cook had earlier accepted that England made a mistake while inspecting the Mohali pitch and they will select an upright team for the Wankhede Test.

Wankhede Stadium is hosting a test match after three years and a humongous crowd is expected to embrace the match with their presence. India will look forward to making this a memorable test match for Mumbai and would also want to claim the series title after this match.

Everything said and done, England has defeated India twice on Indian turf in 2006 and 2012 and it is not right to underestimate the inventors of the game.