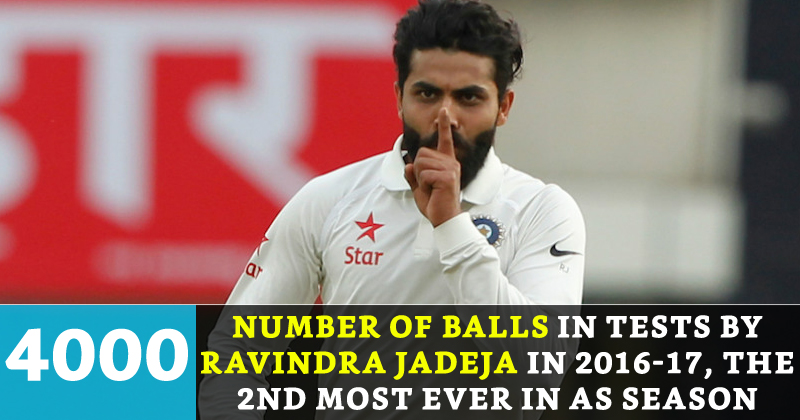 India vs Australia 3rd Test of the Border-Gavaskar Trophy finally ended in a draw on the fifth day at Ranchi and after all those nail-biting moments, Aussies were able to salvage a draw. Coming into the 5th day at 23/2, all the Australian team needed was magic to prevent India from taking the lead and that is what they got.

Shaun Marsh (53) and Peter Handscomb (72) batted out 62 overs, putting on 124 runs for the fifth wicket, including a wicket-less session and forced the game towards a draw, which seemed next to impossible at the start of the day. Ravindra Jadeja was the man of the hour as he claimed 4 wickets and provided India a breakthrough whenever there was a need. Ravichandran Ashwin and Ishant Sharma both claimed a wicket each.

Watch: Ishant Sharma vs Matt Renshaw and That Marvellous Over!!

Australia finished at 204/6 with Peter Handscomb and Matthew Wade being unbeaten before the Indian skipper, Virat Kohli, offered the draw.

Coming back to the ‘Man Of The Hour’, Ravindra Jadeja has prospered as an allrounder through this home season and his record-breaking spree seems to have no end. From adding 54 substantial runs in India’s second innings to taking 9 important wickets in the India vs Australia 3rd Test (5 and 4), Ravindra Jadeja has done it all.

“They came prepared for Ravichandran Ashwin and Ravindra Jadeja came out of syllabus”.

The Numbers From the India vs Australia 3rd Test

Suhail Saifi -
The word Yoga essentially means, “that which brings you to reality". In literal words it means union. This ancient Indian practice has...

Going Through A Vitamin A Deficiency? Check Out These Vitamin A...