Home Sports Cricket Watch: Chris Gayle Is Too Excited To Come Back To India 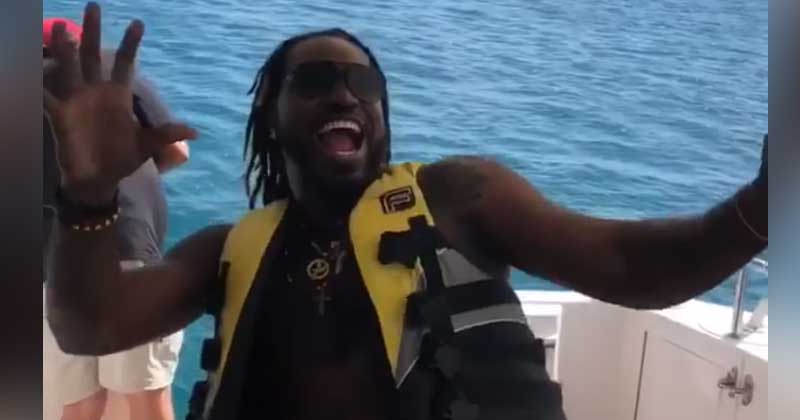 Chris Gayle is one of the trophy players in Indian Premier League (IPL) who has time and again proved when he’s in form, nothing can stop him. He has proved to be an all rounder with the right amount of sportsmanship spirit and competitiveness in his mind. Plus, who can leave the fun personality of Chris Gayle out of context while talking about him?

He’s the man who never shies away from dancing his way to the win and then partying like there’s no tomorrow. After all, we all have seen numerous videos of Chris Gayle just stealing everyone’s heart with his dance moves.

The 11th edition of IPL is all set to make a kick-off start on April 7 and Kings XI Punjab’s Chris Gayle is enthusiastically living his gala time by performing an Indian style dance.

The 38-year-old is too excited to be back in India for the league and among his friends, which can definitely be spotted in his short, yet extremely entertaining dance video. Gayle uploaded a video of himself dancing on Mundiyan To Bachke Rahi while holidaying. He’s on a yacht with a bunch of his friends and having a great time.

Sporting a life-jacket, Gayle does all the right bhangra moves for the song and looks amazing while doing them too. And, his fans are just loving the moves to be precise.

The West Indies former skipper went unsold twice in IPL 2018 auction after which he was bought by the Punjab franchise. Chris Gayle’s IPL career with Kolkata Knight Riders but he didn’t play any matches in the inaugural edition due to an injury and national duty. Gayle spent his another two years with the Kolkata franchise and was later moved to Royal Challengers Bangalore. In 2011 he moved to RCB and was with the franchise till 2017, scoring some memorable sixes at the M. Chinnaswamy stadium in Bengaluru. In fact, Gayle’s stint with RCB can easily be considered to be his best time while being a part of the cricket world, both on the field and off it.