Caught On Mic: Virat Kohli Using A Cuss Word During The 2nd Test

Be it a dropped catch or a wrong decision by umpires, we have seen many Indian players calling out someone’s mother or sister. Language is indeed a blessing to humans as this how we express ourselves, however, when it comes to cursing, celebrities need to think twice as there are many who follow or idealize them.

This brings us to the Indian skipper, Virat Kohli, who is known to be the most arrogant and short-tempered member of the squad, having the tag of ‘Angry Young Man Of modern Day Cricket’. Once again, he is in news for using the wrong language and while he has done the same on many occasions but this time around, his voice got recorded on the stump mic. 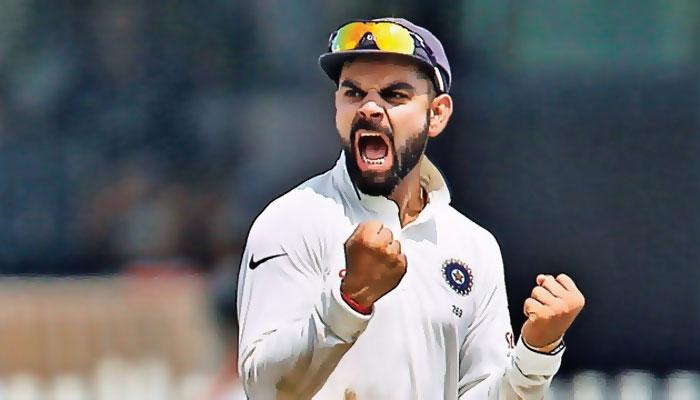 He was recorded using a not-so-appropriate word during the ongoing South Africa vs India 2nd Test which is a do or die match for the visitors if they want to win their first ever Test series in South Africa.

During his partnership with Murali Vijay on day 2, he said and we quote, “SHAAM TAK KHELENGE, G**ND PHAT JAYEGI”.

While this shows that how eager the Indian skipper is to turn the tables by coming back from down under, the language might seem a little inappropriate to many.

One of the Twitter users recorded this video and uploaded it to the social media portal via his handle, which as expected, went viral.

Twitterati had mixed views on Virat Kohli using ‘foul language’ on the field and while it’s the judgment of the masses, let’s take a look at who had what to say.

@kumarrr123 @EnggJourno He is not abusing anyone. That’s probably the way he talks

@cinemawaleghosh @kumarrr123 Yes Sir, that’s natural Delhi way of talking. Nothing abusive here. Also this is his conversation with his teammate, he can talk as he wants.

As for the South Africa vs India 2nd Test, Virat Kohli has registered his 21st Test century in International cricket and is standing strong at the crease to cover up the 335-run trail given by the Proteas in the first innings.