Home Sports Cricket From ‘Bodyline’ to ‘Broadwalk’: The Biggest Ashes Controversies over the decades 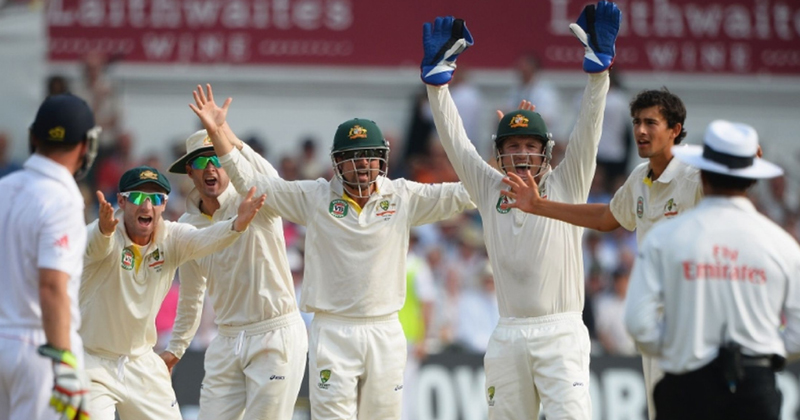 The Ashes, the biggest Test rivalry in history, is has never been bereft of controversies. In the ongoing Ashes 2019, the first test at Edgbaston several incorrect umpiring decisions and the English crowd booing Steve Smith and David Warner made headlines. The 142 years of Ashes history is rich with a plethora of great controversies that literally shook the cricketing world. Here is a look at some of the biggest Ashes controversies of all time.

This wasn’t just the biggest Ashes controversy; the Bodyline saga has gone down in history as the biggest conflicts to have hit cricket. The ‘Bodyline’ came into existence in the Ashes 1932-33 in Australia where the English team devised a way to stop Australia’s premier batsman, Donald Bradman, by what was then called the ‘Leg Theory’. The plan was simple: bowling at the body of the batsman at pace with the leg-stump line.

Not only did it make run-scoring difficult it was also fatal and dangerous as there was no limit to bouncers in one over back then. This led to several injuries, blood being splattered and bones being broken. In fact, a vicious ball delivered by England’s Harold Larwood, who was at the center of this plan, struck Australian wicket-keeper Bert Oldfield on the head and made him unconscious. England went on to win the series 4-1, but were widely criticized for their unethical Bodyline approach.

Dennis Lillee wore his heart on his sleeve and never really bothered much about what the world thought of him. On the second day of the first Ashes Test at Perth in 1979, this was on in full display as Lillee sauntered onto the field flaunting a metal bat. Called as the ‘ComBat’, the bat had been made with aluminum and had been gifted to Lillee by a friend.

After Lillee smoked a boundary through covers, there was a resounding ‘thunk’ sound that reverberated across the field. England skipper Mike Brearley raised objections about the bat with the on field umpires and after a long and ugly verbal altercation Lillee was eventually asked to let go of the metal bat. A fuming Lillee hurled the bat in the air and was seen mouthing off some expletives as he was forced to give up his metal bat.

This is one of the biggest Ashes controversies in recent times and tainted England seamer Stuart Broad’s name in Australia forever. On the third day of the Trent Bridge Test of Ashes 2013, Broad caused furore in the Australian media and fans as he refused to walk after edging a delivery from left-arm spinner Ashton Agar to Michael Clarke at first slip. The Australian fielders appealed vociferously but the umpire Aleem Dar was unmoved.

However, TV replays on the big screen showed a clear and thick deflection off Broad’s bat and into the palms of the fielder. The Australians were livid on the field but the decision had been made. Broad, who was batting on 37 then, went on to add 28 more runs and England eventually won the Test by just 14 runs. This led to severe heartburn among the Aussie fans and Broad was labeled a “cheat” unanimously across their media.

Ricky Ponting was known to lose his cool every now and then and challenging battles often brought out the worst in him. The Ashes 2005 has been one of the best and toughest Test series in the history of the sport. Ponting, who was the Australian captain in the series, completely blew his lid when he was run-out by substitute fielder Gary Pratt. The incident happened in the 4th Test of the series at Trent Bridge when Ponting was scrambling for a single at the batsman’s end and Gary Pratt, who had replaced fast bowled Simon Jones a little earlier, managed a direct hit from cover and had Ponting short of the crease.

The match was hanging delicately then and Ponting’s dismissal for 48 gave England the edge. Ponting was livid as he walked off and the cameras clearly caught him mouthing off expletives towards the England dressing room – they were apparently directed at coach Duncan Fletcher.

The background to the whole incident was that Ponting and the Australians were already peeved at the England team for using multiple substitutes throughout the series. And little-known substitute Gary Pratt achieving such a crucial run-out only added fuel to the fire. The Australian captain was fined 75 per cent of his match fee and England secured a famous 3-wicket win.

What are some of the other biggest Ashes controversies you feel should be on this list? Comment below.