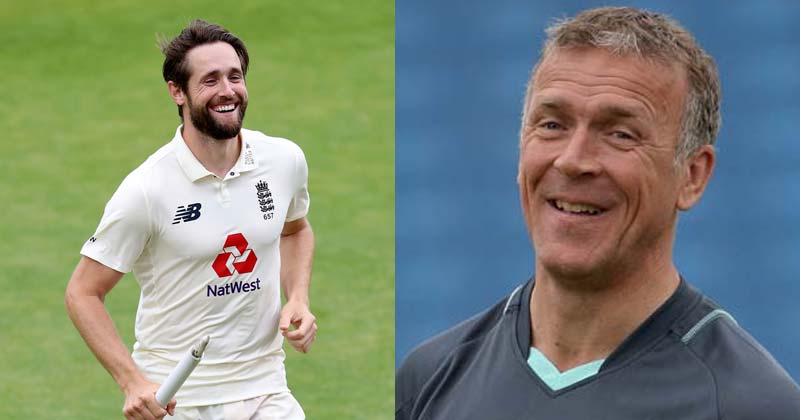 It didn’t take long for England to smash the Jason Holder-led West Indies team at the recently-concluded Test match at Manchester. This is despite all of Day 4 being rained out all thanks to what was incessantly inclement weather.

But at the heart of the West Indies’ easy capitulation in the second inning, the Holder-captained team managing only 129, there was a special bowling performance.

On a pitch assisting the seamers, while Stuart Broad emerged as the man of the moment, going past 500 Test wickets (massive achievement for any bowler), it wasn’t Jimmy Anderson’s usual new ball partner who clawed into the West Indian line-up. It was the usually modest, mild-mannered good-natured English pacer Chris Woakes.

On the whole, playing only 2 games in the 3-match series, Chris Woakes emerged with 11 wickets. But 5 of those came alone in that 129 all-out, a scorecard that the West Indians would not have been proud of.

Truth be told, it wasn’t that the pitch was unplayable and absolutely opposed to batting; it was just that one English bowler, in particular, was hard to score off. His 11 over spell yielded yet another fifer for Chris Woakes, the usual first-change bowler.

On his own, Woakes’ performance stood out and what really shackled the spine of West Indian batting was his unplayable deliveries that resulted in no fewer than three leg before wickets. Almost the entire lower order perished in front of Woakes’ seem movement. Just who saw that coming.

But to take 11 wickets signifies a good day at the office for any impressive pacer. That those many wickets come from just 2 games, not more signifies real success, and what fast bowlers brandish their skills on: effectiveness, that incisiveness.

Which is why Chris Woakes’ brilliant form in the series with the red ball moved former England skipper Alec Stewart to call him an ‘unsung hero!’

Wasn’t the wicket-keeping batsman absolutely right in that regard?

Truth is, Cricket may be stirred by individual performances, such as Stuart Broad’s incredible tally of 16 wickets (also coming from just 2 Test matches, both of which were held at Manchester). But, it takes an entirety of the team’s effort to put the side on the driver’s seat.

In that regard, it would be unwise to brush aside Chris Woakes fantastic spell at the just-concluded Manchester Test match. Just the way one must actually credit the West Indies team for taking the risk, fighting the uncertainty as they packed bags and boarded the plane to England, we must also hail Chris Woakes’ attempts to blunt the blade of the Caribbean batters.

This wasn’t a very easy side to defeat it must be said, even as two of their promising Test batsmen didn’t tour- Hetmyer and Darren Bravo.

In that sense, let us make time to read what Alec Stewart had to say on Chris Woakes, the true star of the second-inning fall-out of West Indies.

He’s almost the unsung hero of the England set-up because we talk about Broad and Anderson then the pace of Archer and Wood, where as Woakes just goes quietly about his business. I’m a massive fan of Woakes, especially in England. His record in England is outstanding. It’s a real feather in his cap that he got the nod when Chris Silverwood said ‘we are picking our very best bowling attack for this Test match we have to win!”

It’s also easy to discard so many claims and comments made by former cricketers in an age of incessant and almost free-flowing communication al thanks to social media hype. But you can only trust someone who has against his name the class and experience of having participated in 133 Test matches for England (besides captaining the side) at the highest annals.