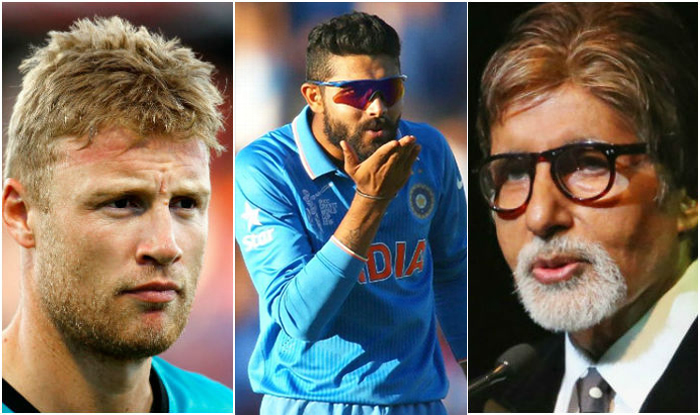 Andrew Flintoff tried to troll Virat Kohli on twitter, yesterday night and we all know the legendary Amitabh Bachchan replied on his tweet in the most blockbuster way possible. It was clear even if he is Amitabh he could not stand a word about Kohli. When the former England captain took a dig at Kohli during the yesterday’s match between India and Australia, Amitabh put him down with an amazing reply to his tweet but the cricketer did not stop. This time, he tried to troll Amitabh Bachchan and Oh! Boy, he should have known what he was getting into.

Soon, Sir Ravindra Jadeja’s parody twitter account replied to Flintoff and it is the most epic reply ever.

So first Flintoff tried to troll Virat but he didn’t know that it was the silence before the storm.

The legend Amitabh replied to Flintoff tweet, which was hilarious and true enough to seep off the ground of his feet. But then sledging has no excitement if it doesn’t grow with the comments. This time, Flintoff targeted Mr. Bachchan and took a dig at him directly. Guess he forgot to activate his brain while doing it otherwise who on the earth would do something stupid like that in their sane mind.

Amitabh did not reply to his comment but how can we let him go that easy. A parody account of Sir Ravindra Jadeja tweeted back to his comment and it was right on his face.

It was the bestest reply on the behalf of Legendary Amitabh Bachchan and we hope Flintoff is not banging his head against the wall after this. Or maybe he should. Wink!