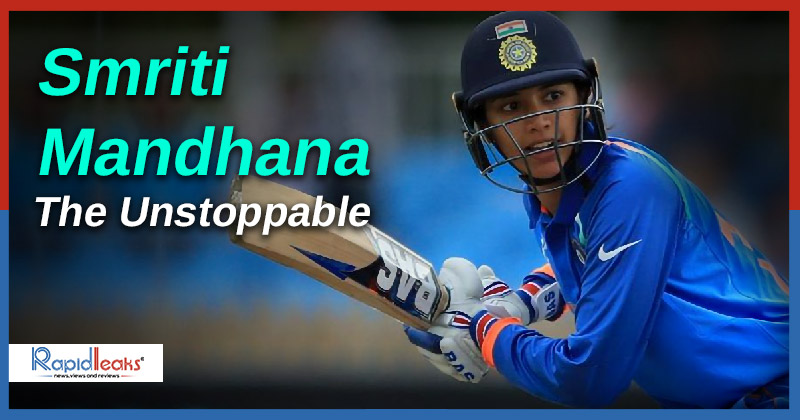 On the occasion of her 22nd birth-anniversary, here’s a humble tribute to the one and only Smriti Mandhana- she’s a keeper of India’s hope and she’s the fire that cools the side amid pressure.

The scoreboard has been ticking away constantly

The runs have been coming in regularly,

There’s a change of direction- one sees,

There’s a change of perspective- one feels,

But today, an integral part of Indian Cricket,

A new force is gaining control- everyone feels,

Anjum, Mithali, they have all made sure India’s is the momentum

But time has come now for something special by the young guns,

As experience changes gears, passing the baton to the youth,

In walks a batting talent that’s caught the attention of bowlers, umpires, fans and every dude,

She doesn’t just bat- the ball blasts out from the middle,

She’s the mainstay, the vanguard of the Indian batting, not anyone who’s a second fiddle

Maybe it seems, being smashed all over is the destiny of the ball,

But few can align concentration with aggression the way Smriti Mandhana does,

At 22- how many youngsters manage to stand as tall?

Runs in England, runs against South Africa, runs in plenty whether abroad or at home

Mandhana is the batswoman they all fear now in India, her shots echoing far and wide, perhaps even ringing bells in Pope’s Rome

Finding gaps to her often seems to find holes in the bowlers’ craft,

Her’s that ferocious pull in front of square as also the talent to guide the ball to third-man, playing it a little daft,

From Brunt to Perry, Stafanie to Suzie, everyone has but one concern

How to get Smriti out early, someone for whom batting is another name of fun,

But get your facts right, she is not only about hitting the ball over the line,

Mandhana’s might may be in the pull stroke, but her’s are wonderful square drives,

For anything that’s too active for too long cannot always go rampant,

Which knock is special, which innings marks the true Smriti Mandhana,

Is it the 90 off 72 against England in England or the 57 off 42 versus Proteas that ensured it was all sweat in Ismail’s bandana?

Whether it’s admiration amongst her own, love from cricket-loving fans world-over,

Smriti Mandhana is already an adjective of craze,

Mandhana’s talent reaching way beyond India, into the heart of fans, from the screen of the handset or the TV,

Let us also remember it’s early days for her,

And that her battle has only just begun,

She may have scored hills of runs, but what the true fan wishes is to see a mountain of runs,

Perhaps her doing that may not actually be that much tough,

For in Mandhana there’s support for Mithali, a true partner for Harmanpreet and respect from everyone, be it Sachin, Virat or Raina

Go on to score and be yourself Smriti

for the game is lucky to have you and you’re a one of a kind really!