Home Positive Stories A woman carried a heavy dog all the way down a mountain... 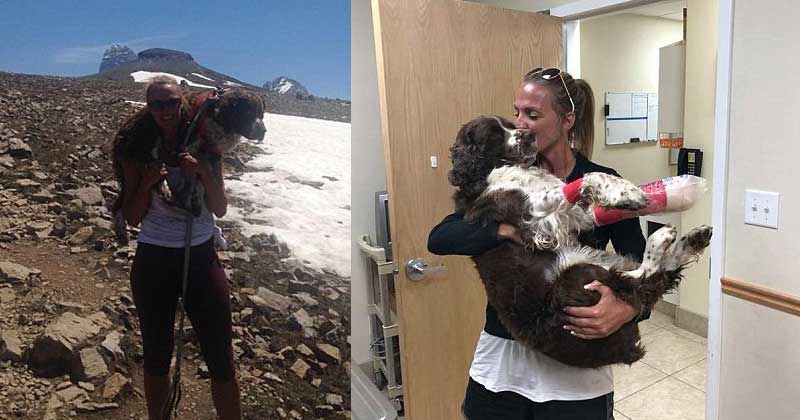 Everyone loves a good pet. And more so when it’s a dog, perhaps a universal favourite. But while dogs are lovely, jovial and playful- it’s never a good thing to have a lost dog.

It pretty much sucks to have a dog that’s got lost somewhere in the muddle, be it a hike, an outdoors event or something of that sort.

Who would relish the idea of entertaining a lost puppy or a dog, man’s actual closest friend? It’s a peril nightmare when something of that sort happens. It could be likened to having a member of one’s family lost.

And recently, a similar scenario occurred at the picturesque Table Rock, Idaho, in the United States. A badly injured English Springer Spaniel had gotten lost in the wilderness of the Idaho mountains, by the side of the famous Table Rock.

The dog, young that it was, weighed a full 55 lbs. Knowing not what to do or where to go, thankfully for the adorable pet, it was retrieved by one Idaho single mother. Showing an incredible act of heroism at an hour where it was needed the most, Tia Maree Vargas, who happened to be at Table Rock, with her father on July 5, saw Boomer- the lost pet.

Thankfully, she was able to find the ailing pet, who’d been injured and seemed, visibly lost and surprised. That is precisely when the lady decided to help out the dear dog.

But what the lady did next would surprise one and all with the immensity of her bravery. Vargas, soon discovered that an aggrieved family had been looking out for its beloved pet- Boomer. The said family was also hiking along with children when the rather good-looking dog got lost.

Upon meeting the family, Vargas decided to lift (or carry) the dog all the way down with her bare hands. The reason?

Since the family already had some kids in there, there would’ve been no way to help the injured dog. That is when Ms Vargas decided to take matters into her own hands.

The beautiful bond between man and the wild is such that often it’s love that takes the centre court.

And so it did, on this occasion.

‘There’s no way I could have left him up there and still had a heart at peace.’

Surely, you can be compelled into believing and rightly so that anyone else who’d be a pet lover would do the same thing that this brave Idaho woman did. But truth be told, climbing back all the way down the mountain trail was not going to be a child’s play.

Unfortunately, given the snow and the debris, the hike’s trail for the path going southward would be closed. So what next, wondered the single-mum? Still, she persisted relentlessly.

And after about approximately six hours and seven miles of snow and debris- the lady was able to carry back the dog finally to its destination. Well, as you may have heard- all that’s well, end’s well.

But only on this occasion, it could be said, not everyone or everything was well. Carrying Boomer back to the street level where it would be reconnected with the owners, the Idaho hero was able to help out in rescuing a pet that may not have made it back safely. But while that was the beautiful real-life story of a dog rescued against overwhelming odds, what’s even poignant is what happened thereafter.

And this one really takes the cherry on the cake. Believe it or not-

Overwhelmed by Vargas’s selfless act, and in the process of selling Boomer anyway, the family decided to have his injuries treated and give the Spaniel to her and her children. How beautiful is that?