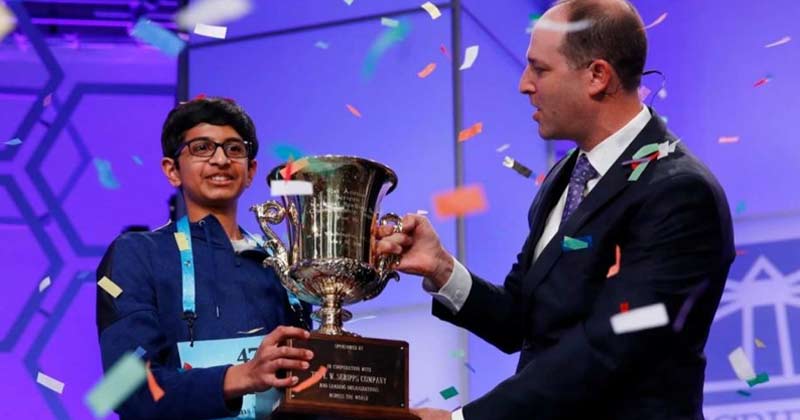 Spelling is often the hardest thing to do. Indian-origin kid Karthik Nemmani would know this for sure. You could liken it to the toughest nut to crack. But for some kids, it’s more of a natural way of dealing with their talents. Rather make it, God-given talents. Few places or stages can be as interesting or prestigious as the eminent spelling bee contest. It’s a measure of pure skill and outstanding inherent talent that kids have for language and a flair for spelling.

The spelling bee has been, for decades together an excellent propagation of the soft power of the United States. It’s the McDonald’s or Hollywood of student intellect, truth be told. Imperious in engaging many a world’s talent and incisive in its judgement of the best of the lot.

The boy unquestionably making news in both United States and in some circles of India, is the polite, bespectacled Karthik Nemmani. By winning the spelling bee ahead of 16 finalists in the United States, Karthik has not only made his parents proud. He’s also given a proof of what is often quoted as a constant reminder to us all. Kid’s are special. Unquestionably so!

Beating some comprehensive talents, some his age, some maybe more educated or knowledgeable and above all, none of whom he knew even fractionally, Karthik Nemmani edged out not only talents from the United States but also from Canada. Beating nine girls and seven boys, Karthik Nemmani proved his mettle.

But truth be told, this wasn’t the best part about Karthik Nemmani’s journey. He even managed to beat some contestants who had appeared in the spelling bee previously too. This obviously means that he didn’t hold the edge in terms of experience or exposure that some of the other spelling bee contemporaries enjoyed.

It’s never quite easy to make it count in easily the toughest spell contest in all of the world. The spelling bee is the pure measure of a young cerebral mind’s true talent and potential. Karthik Nemmani easily vanquished stringent questions such as ‘Ispagul’, “Telyn” and, “Praxitelean”.

While victory in itself is a proud feeling, what is glorious is the past result or tradition attached to it, that makes it a tradition of sorts. If you are remotely aware of the spelling bee in the previous installations of the legendary competition, then you’d know that for 10 or 12 seasons, most winners of the acerbic contest have been from South Asian descent. Karthik Nemmani’s win means that this tradition continues and another Indian has gone on to crown himself as the master of spelling glories.

But, in case you are wondering how hard or challenging this really is, then maybe a simple glance at the sheer rigour required to excel at the highest level is required. A contestant, in order to mark himself or herself as the ultimate winner, has to trump others for a continuous streak of nearly 5 hours. These are 5 hours of constant spelling gruelling that one has to master. Can you even imagine?

Aged 11 to 14, the finalists were talented young kids who, it has to be said inarguably, gave it their all to emerge on top of it. But in the end, the 14-year-old kid with Indian roots was able to triumph the acerbically pushing challenge to the best of his ability.

And all that said, the greatest reason for celebrating young Kartik’s victory is that his triumph came against as many as 515 contestants this year. This is no ordinary figure. Last year, there weren’t even 300 contestants in the same challenge. There were only 291 participants in the said contest.

This year the spelling bee was held in Maryland in the United States and the competition was even televised live on famous sports channel Espn. So famous has been the mighty reach of this contest that there were contestants who had appeared in as many as 4-5 stints in a bid to thump everyone down. Consider 13-year-old Indian student based in the United States, Tara Singh. This was her fifth attempt. If this isn’t incredible then what is, it remains to be seen?