Every now and again comes a piece of news one may be compelled to call funny and if not, then simply weird. But then, it may also happen that something that goes on to tickle the funny bone also highlights the plight of someone; it could be an individual, it could be any living being on this planet, as a matter of fact.

But yet, when we bully someone, subjecting one to ridicule- we often forget that people do have feelings, regardless of which we continue to stand on them with our heavy boots of judgment, seeking a weird sense of pleasure from it.

So when recently, a Delhi teen ran away from his family, choosing to instead isolate himself from his immediate surroundings than opting to stick with it, one was compelled to understand the plight of the individual. What would’ve happened, what terrible things might have been said to him that it actually compelled an innocent being to run away from his own familial set-up?

It turned out that a 17-year-old Delhi teen, who actually ran away to Mumbai, without having too many possessions with him, was actually coaxed into taking a harsh stand. Frequently made fun of, constantly subjected to banter and ill-meaning rants and retorts, the Delhi teen- a transgender- was called out because of his orientation.

It was also revealed that the Delhi teen was actually a young student of class Xth. Everything – whether it was his walking style, to his speech, his conduct- was subject to incessant bullying. This shook him. This upset him in ways one couldn’t possibly describe.

And it’s not too hard to understand why. But the troubles of this youngster didn’t merely end with facing the brunt of bullying at school. Even as his parents dropped him out of school- perhaps not too surprising a move- at home, there were other woes. Not being given any pocket-money whatsoever made things only more difficult. Other than that, not begin allowed to go anywhere without his mother made things a bit complicated.

While all of this could be attributed to being raised in a family that survived, somehow, in a slum while facing the abuse by an alcoholic father, the harshness of the outside world didn’t make life any easier too.

But as fortune would have had it, a Mumbai cop- Mr. Vijay Panchal- found the diary of the Delhi teen who had to eventually run away from the bickering surroundings. Impressed by the troubled youngster’s love and passion for poetry, Mr. Panchal would begin to feel an immediate connection with the person.

He wanted to come to his help, he wanted to make things better for him. What was rather beautiful was the way in which the Mumbai cop- who obviously had no prior knowledge about the teen’s existence, let alone sharing a connection with him- felt the need to come to his rescue.

And true to the saying, there lies lightness beyond the scary storm, there lay hope and brightness for the troubled being as the Mumbai cop finally succeeded in convincing the transgender teen’s parents to help their child. He managed to convince the parents to accept and not reject or defend the youngster’s orientation.

At the end of the day, it could be said that humanity prevailed, hope won above indifference and the power of unconditional love and support, as exhibited by this sincere and humane Mumbai cop- who succeeded in uniting the teen with his father- shone bright, as it should have.

One can truly understand the feelings of the worrying father, who despite having not done his best to help his troubled child, was utterly delighted upon hearing from the Mumbai police about the whereabouts of the Delhi teen.

The Times of India, shared some candid details about this touching human story of unconditional love and bond, “on searching the teen’s bag, Panchal found a makeup kit and a diary.

As the two got talking, the teen admitted he had stolen Rs 1500 from home and had run away on Saturday. He took a train to Bandra Terminus and survived on vada pav, till his money dried up. As he was a minor, an auto driver bought him to the police station. 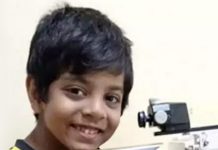 An 8-Year-Old Just Bagged a Gold At Moscow. Moreover, The Kid Is a Cancer Survivor