Today’s date is the birthdate of Maqbool Fida Husain.Thanks to google doodle, he has got the attention of young Indians who might not have known him. Yes, the Indian who later became Qatari was on forgotten terms. Now, at least there will be curiosity among youth to know him. 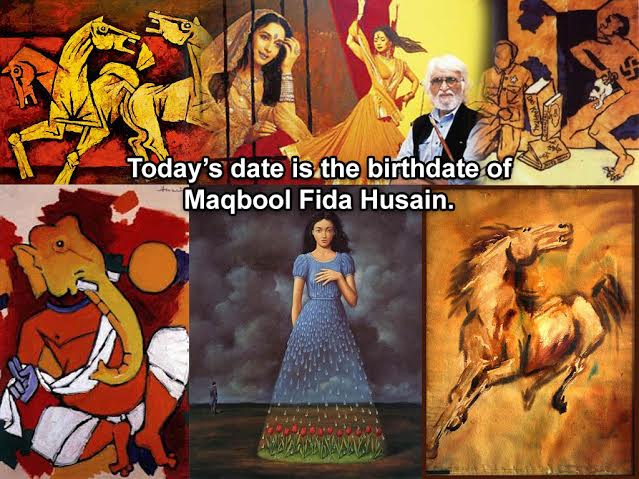 He was born in 1915 till 9 June 2011, his journey has been an indefatigable one.His work was and is popular all over the world. He has shown illustrative arts depicting civilizations, traditions and stories.He explicitly told about his fascination for Madhuri Dixit.Government of India honoured his work thrice in 1966,1973 and 1989 with the awards the Padma Shri, the Padma Bhushan and the Padma Vibhushan respectively.

Genre of paintings was colossal one. He depicted topics from Gandhi to Mother Teresa, from the British Raj to modern contemporary India. and he also depicted the Ramayana and the Mahabharata. His paintings were the melodious poetry depicting urban and rural life especially women.

Husain was a painter, a movie-maker, a photographer, a lover and devotee of art. He had directed films and he also won Golden Bear Award in Berlin Film festival in 1967 for his film “ Through the Eyes of a Painter” and his journey for film-making , short -films never ended.

From poster making boy to toy worker and then, painter to filmmaker are the rainbow colours are in his life’s  journey. At his 100th birthday, Anniversary let set aside the controversies he had in his past life. We should learn and respect from the past incidents that what had happened in the past and should not depict the life of artist from few works, yes no one is allowed to hurt any religious sentiments yet no one can deny the great artist he was, and the soul he had of a learner and a genius painter.