Benefits of Red Meat. What Portion of Red Meat Should Be Present In Daily Diet?

Home » Benefits of Red Meat. What Portion of Red Meat Should Be Present In Daily Diet?

Red meat has been one of the most controversial non-vegetarian foods worldwide. There are many known benefits of red meat but that didn’t save it from being a subject matter of many debates.

Humans have been eating this meat since the stone age. But off late there has been a lot of deliberation around the side effects of this meat on human health. In this article, we will take a deep dive into the benefits of red meat as well as ponder if the concerns around it are really substantial.

What Can be Included in The Category of Red Meat?

To begin with, let us first know which meat can be categorised as red meat. Meat which is derived from mammals is considered red meat viz. Beef, pork, lamb, ham, etc.

What is a Paleo Diet and How is it Related to Red Meat?

The word ‘paleo’ means ‘old’ or ‘ancient’. Paleo diet derives its meaning from these words only. It is a diet in which its followers eat what our ancestors used to eat 1000s of years back. It majorly consists of unprocessed food. Also, it includes meat which is of animals who are fed in their natural habitat and not in some factory.

Given the benefits of red meat and its use as a food for centuries, it is quite famous in the paleo diet.

Red meat is one of the most nutritious foods for people of all age groups. It is fully loaded with antioxidants, vitamins, minerals, and many other nutrients which can improve our overall health in many ways.

The following are a few of the many benefits of red meat:

Zinc: This nutrient’s primary job is to keep our immune system up and running effectively. Other than that it is also required for DNA synthesis.

Zinc is loaded in grains, eggs, fish and red meat. But the absorption capacity of the zinc obtained from red meat and fish sources is the highest.

Iron: The basic job of iron in our body is to aid the red blood cells in transporting oxygen to various parts of our body.

The deficiencies of iron are usually witnessed in children, pregnant women and elderly people.

Grains, beans and dark green leafy plants are a rich source of iron. But the benefit of red meat is that it contains ‘heme iron‘ which gets absorbed easily.

Suggested Read: Importance Of Fats In The Body. Why Does Fat Often Taste So Good? Let’s find out

Vitamin B: One more nutritional benefit of red meat is that it contains B12 and B6 in good proportion. And as we know, vitamin B12 is a good fuel for our nervous system and vitamin B6 for our immune system.

Is Red Meat Good For Health?

As discussed earlier, the benefits of red meat are often debated on many leading platforms. There are theories which state that higher consumption of red meat leads to cancer, type 2 diabetes and chronic heart diseases.

But most of these studies are ‘observational’ in nature and there is no direct linkage derived from it.

One of the largest studies which were conducted with around 4,48,000 people concluded that the consumption of processed red meat shoots up the risk of early death. However, the same study does not extend the same review about unprocessed red meat. All that these researches have done is draw a correlation without any proofs.

While there are innumerable benefits of red meat one cannot red flag it based on such studies. To conclude this please note that no concrete evidence has been drawn, so far, proving that red meat is not good for health.

Suggested Read: Health Benefits of Nuts: Why Are Nuts The Miracle of Nutrients?

One has to comprehend that processed food has its own detrimental effect on our health. And processed red meat cannot be an exception to it.

Unless some concrete study is put out, we should not relinquish the benefits of red meat. But most certainly if you are someone who hoards on junk food and classifies that as a healthy intake of red meat then you are mistaken.

Home » Benefits of Red Meat. What Portion of Red Meat Should Be Present In Daily Diet? 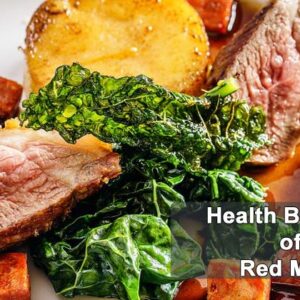