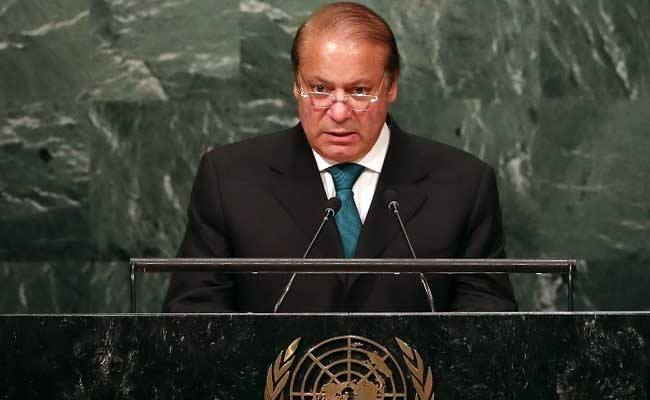 Pakistan’s PM Nawaz Sharif addressed the 71st session of the United Nations General Assembly in New York on Wednesday night. He wore a green tie and started his speech with ‘Bismillah ir-Rahman ir-Rahim’, which literally means “In the name of God, most Gracious, most Compassionate”. Many in the civil world would take these to be subtle hints at the PM’s actual message that he wanted to send out to the world at such an important forum.

He spoke about turmoil in Europe, the Middle East and Palestine and brought attention to the fact that any development, economic or humanitarian can only be made possible when there would be internal peace and stability in Pakistan. Here’s where the most ridiculous of words start flowing out of the PM’s mouth as if possessed. He goes on to say – “My country has been the principal victim of terrorism including that supported, sponsored and financed from abroad.” I listened to the 20 minutes of the most mechanically delivered words without any feelings or conviction. What he said sounded similar to what a class bully says when caught red handed and tries to put the blame on someone else. ‘It wasn’t me; I don’tknow who did it? You need to stop this happening!’

All his words tried to portray Pakistan as a victim of terrorism and his willingness to fight global terrorism. (Sarcastic laugh) He called the burning issue of POK as “The Kashmir Dispute”. Excuse me Mr. Sharif (you should rather drop this last name), but it has never been a dispute for India, that land has always been and will belong to the democracy that is India. You should be worried about losing a province rather than gaining some unlawfully encroached upon land.

He talks about the ongoing massacres in Afghanistan but very conveniently omits the recent attacks in Uri for which the international communities have slammed his country openly. He even blamed India of stalling his efforts towards peace by imposing” unacceptable preconditions to engage in a dialogue.” He never mentioned what those “unacceptable preconditions” were. Maybe his state was asked to refrain from sponsoring terrorism especially in POK and elsewhere in India and this they could not do but wanted to present their two faced diplomacy by holding ‘Peace Talks’ with India.

Talking about the present happenings in Kashmir, Nawaz calls it an ‘indigenous uprising of the Kashmiris’, and Burhan Wani a youth leader. At this point my sane mind was already going to tip over. I didn’t know whether to laugh hysterically at his idiocy or start angry Tweets and FB posts with obnoxious hashtags for this vile human being.

I would still (humbly) request Mr.Sharif to stop worrying about Kashmir and the people it has lost and focus more on the sad affairs of Pakistan’s condition as a country.

Trying to get the UN to invoke plebiscite in J&K and a U.N. fact-finding mission to Kashmir is not going to erase the fact that the needs for such resolutions have risen only due to the uncouth and dastardly behaviour displayed by Nawaz Sharif’s own country.

He went on making statements and nullifying them on the go. Like when he said that Pakistan was not a part of the Nuclear weapon race with India but also clarified that they had enough nuclear resources and expertise at hand, but in safe custody.

His steely tone and often interrupted rhetoric only displayed his lack of conviction in his own words.

He ended his address with a reminder to the UN of Pakistans contribution to the UN peacekeeping forces over the past many years. It was almost like him saying “we help you keep peace, why would we disrupt it anywhere?” You could read about Pakistans peace keeping missions here:

Pakistan International Airlines (PIA) on Wednesday cancelled flights to Gilgit and Skardu in Gilgit-Baltistan region due to “air space restrictions” in the wake of Uri terror attack. If Pakistan was not behind the Uri attack, why are they keeping their airspace free for fighter jets? And if they really were, what’s the use?

Mike Pompeo Hits Out At China At Recent QUAD Meet In Tokyo!