Home International Is The Longest Train In The World In Africa, Not Europe Or... 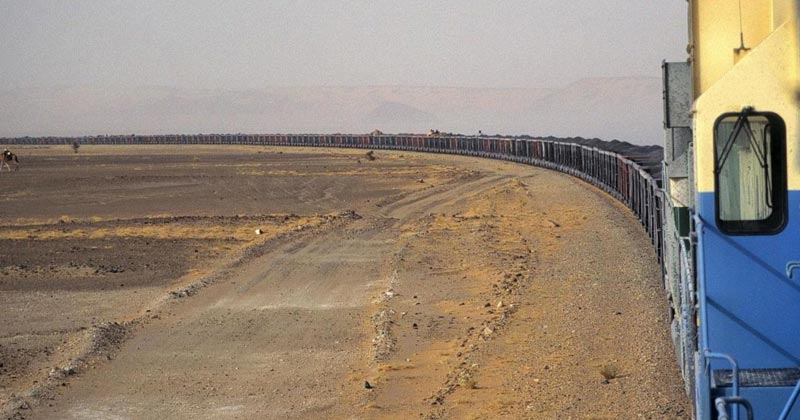 Africa was once known as the dark continent. But there is more to the mighty continent than the sum of biases that command the critics’ attention. It is the quintessential land of mining and manufacturing. The second-most-populous continent in the whole wide world- after Asia- with a staggering bunch of 1.1 billion people, it appears, that there’s something rather arresting in the ebb of Africa where travel is concerned. For instance, do you know where is the longest train in the world based out of?

Travel via train on your mind? Africa is the answer then!

That’s roughly five and a half decades back in time. Mauritania, the Islamic Republic, the eleventh largest state in Africa forms the heart and soul of the longest train in the world.

So what are we talking about? Well, Mauritania’s Train du Desert happens to operate a daily service from the port of Nouadhibou – which is on the Atlantic coast- to Zouerat.

But implicit in the DNA of this train is its massive length and frame. At full stretch, the journey covers around 20 hours of distance. But if you thought that this was the only onerous context, then think again.

The actual length of the train- it has to be believed- is no less than an exact 2 kilometers. So there we go then! Ever heard of a train that is 2 kilometers long in overall length?

But what makes Mauritiana’s Train du Desert truly enigmatic is that apart from being really long in length, it is made of three or four diesel locomotives, and what’s more- one passenger carriage and anywhere between 200 and 210 freight cars.

By and large, the train is known to cover absorbing lengths of distances across the Sahara desert, also known as Africa’s pride. But all of that told, what really makes the longest train in the world special and unmistakably important for the locals out there?

It has to be told that the Train du Desert happens to be a lifeline for many of Mauritania’s remote desert communities. Untouched by anything remotely resembling development or urbanization, the desert communities often keep to themselves but travel to far off distances to connect with families.

But traveling isn’t always easy on the pockets isn’t it? So what is the other option for anyone wanting to go onboard the magnificent queen of the desert?

Many Mauritanians choose to ride on the freight cars for absolutely free of cost. But then, commuting this way too comes with its own set of challenges.

For instances, many a time traveling under the scorching sun with the temperatures climbing on the higher side of 40 degrees (Celcius) can in itself, be a demanding task.

Yet despite the challenges it requires the travelers to endure, the journey via this train is a boon for several lives. Because many who opt to ride on the Train du Desert are either going to visit their families or meander in search of work.

One can totally imagine this mind-boggling transportation mode to be an ideal choice for camera-wielding enthusiasts. Imagine a montage of arresting images captured in the high definition under the brightly burning sun casting a looming shadow in the midst of the Sahara’s golden desert? Bloggers, travelers, videographers, writers or simply, anyone untouched by the thirst of a truly passionate adventure would want to hop on this one for a journey of a lifetime, right?