Last year when the Memorial museum was devoted to 9/11, the artifacts displayed there gave the experience what happened 14 years ago. 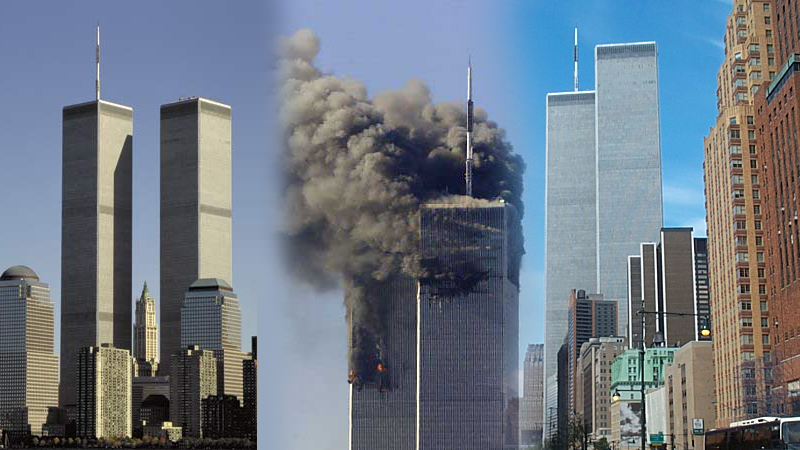 Museum has artifacts from WTC and 9/11, it shows the stories of survival, responders, area residents and eyewitnesses. It honours the souls who were innocent and killed for no reason.

Before that on 10th anniversary of of the attacks 9/11 memorial was opened. There victim’s name are carved in bronze the edges of  two enormous reflecting pools of  memorial park killed in attacks and in Flights (used as weapons by terrorist in attacks )

Those one hour and fourteen minutes shook the world, two flights crashed the giant of economic structure and other two did cause damage not that enormously. Loss of $10 billion in property and infrastructure still could be manage, how lives of  2,977 people (excluding the 19 hijackers) could ever be recovered.Even the lost lives are still unidentified, 1113 victims are waiting for identity.

People are still giving it communal color, the attack was by terrorism not by religion, It was from absent-minded and uneducated morons.

“President Bush at that time made a public appearance at Washington’s largest Islamic Center and acknowledged the “incredibly valuable contribution” that millions of American Muslims made to their country and called for them “to be treated with respect.”

Fourteen years have passed still there are incidents of hate crimes against Muslims and Sikhs. Many incidents shows how blot on humanity is getting darker day by day. Attacks on mosques and other religious centres like hindu temple were bombed.

A study which found hatred at rise against Muslims,arabs and other nationalities of  indistinguishable look is proving to be true at some extent.

Muslim Americans gave their blood, monetary assistance,food, shelter to cause and need of the hour to support America, and Islamic Group came forward for assistance. Still the fear is prevailing.

America was the first successful winner of colonial war for independence

On the anniversary of the attack, we hope the “The United States” remembers it is the world’s oldest surviving federation. It is a constitutional republic and representative democracy, “in which majority rule is tempered by minority rights protected by law.

So, Let’s pay homage to those who lost their lives and hope the USA will face all the obstacles facing on name of religion and will come out as a winner.