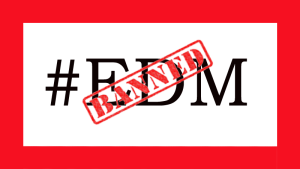 The latest hashtag blocked by Instagram is EDM. #EDM is a common abbreviation for electronic dance music. The social media company confirmed Tuesday EDM to be blocked. This means the hashtag can not be Searched,Tagged or Shared ,which earlier used to occurs automatically on the App.

LA’s HARD Summer festival which was Last week, resulted in two deaths which has Inflamed some debate about use of drugs in EDM festivals.
Instagram spokesperson,Gabe Madway said in a statement that, the tag was blocked because it was being used to share racy photos that fly in the face of Instagram’s high moral standards, he also added that Instagram is working to restore hashtags that have previously been blocked in a quickly way, and to better the policies around hashtags.

Its a practice like many hashtags that was previously banned like  #curvy, which was blocked for month and later Unblocked.