All you want to know about the new windows 10

Windows 10 launched on July 29th and has already been downloaded over 14 million times.

Its faster , smarter and easier. Here is why?

Its Flexible and Universal :
Apps in the new Windows Store will run on any device. A single version of anything will work Everywhere.

Instant Responsive Gaming:
Windows 10 supports streaming games from an Xbox One. Controllers for the Xbox One are compatible with Windows 10 PCs and Windows 10 brings with it Direct X 12 and for serious gamers this is a must have.

Cortana /Search :
Like Siri on iOS and Google GOOGLE -1.01% windows 10 comes with a voice assistant Cortana for Windows phone , Which can complete all the task easily on voice command like, searching your fav. song to responding back to your emails and much more.

Does not Require any additional feature to the configuration or Specification and runs smoothly on PC’s , Tablets as well as Phones.

A New Task Menu:
Windows 8 task switcher has been removed and start menu is back with some additional changes like live tiles. However a new task has been added to Windows 10 that is, you can can switch between virtual desktops by pressing ALT+TAB. 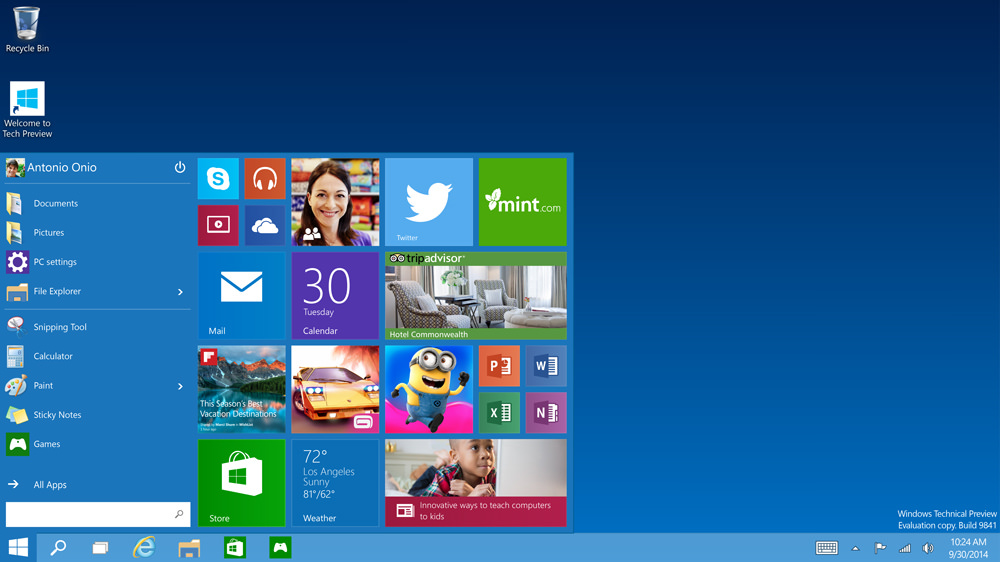 Upgrade it without Spending:

Windows Hello:
Windows has upgraded there security system with “Windows Hello” which is an biometric support designed to reduce reliance on passwords by using your face, iris, or fingerprint     ( Using Web Cam , Fingerprint Reader Etc.).
Additional new feature to security is “Device Guard” which blocks zero-day attacks by vetting unsigned software programs and apps. Windows 10 Microsoft now delivers security patches outside Windows Update so they go straight to your computer the moment they are available.

Edgy Features:
The brand new Microsoft Browser “ The Edge ” is Slick, Fast , Speed Up , Modern and Edgy.
The another new feature is “Continuum“, its allows you to switch your friendly PC into a Smart Touch TAB.

Some-things More:
This Does not just end here , in addition with all of this Windows 10 have mostly Unified Settings.,which makes it easier to work on that.
Updates are mandatory to maintain the stability and Performance .While Windows 10’s mandatory update policy has split opinions, a far less widely reported issue is also taking place: the new OS uses a peer-to-peer (p2p) update distribution system called ‘Windows Update Delivery Optimization’ (WU-DO).The benefit of WUDO is that once one Windows 10 device has downloaded the latest updates it will automatically distribute them to other PCs on your network, saving time.

Windows 10 with all the Improvement and Smarter Features is said to be Greatest Microsoft Releases .Its impossible to praise or damn it right now but soon we will be able to draw the conclusions.